LaFleur's path to Jets, Saleh began 17 years ago in Michigan 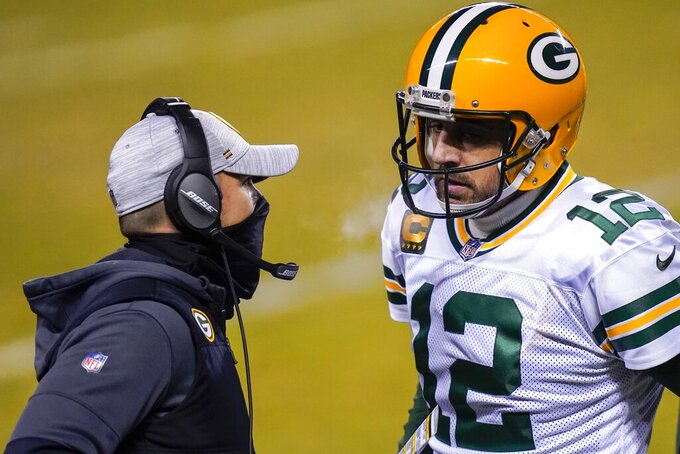 FILE - In this Jan. 3, 2021, file photo, Green Bay Packers head coach Matt LaFleur, left, talks to Aaron Rodgers during the second half of an NFL football game against the Chicago Bears in Chicago. LaFleur reiterated his hope that he’d get to continue working with Rodgers this season while offering no news on the quarterback’s status. (AP Photo/Charles Rex Arbogast, File)

FLORHAM PARK, N.J. (AP) — Mike LaFleur was in high school when his big brother would bring his buddy over to the house so they could raid the family's fridge and intercept the TV remote.

The LaFleurs' home in Mount Pleasant, Michigan, was a popular place during those days in 2004. That was when Matt LaFleur and Robert Saleh were graduate assistants at Central Michigan — both getting entry-level coaching experience.

“Matt and Saleh lived about a mile down the street in an apartment with no cable or anything like that,” recalled Mike LaFleur, the New York Jets' offensive coordinator who now calls Saleh his boss.

“They were trying to save every cent they could because they were GAs and they knew that my parents were right down the street,” he added. "So they’re going to come eat our food and watch all the TV that I was trying to watch and use our pool. So I got to know Saleh at a pretty early age.”

That friendship grew into a bond that eventually carried all three to the NFL.

Today, Saleh is the head coach of the Jets, with whom Mike LaFleur is getting his first opportunity running an offense in the pros. Matt LaFleur is entering his third season as coach of the Green Bay Packers.

“You could tell right away that first year when they were GAs they were really tight with each other,” Mike LaFleur said. “And when Saleh went his separate way, going down to Houston (in 2005), they just remained that way. So I’ve known him for a long time and I’ve always looked at him as a really close friend.”

Matt LaFleur and Saleh reunited in 2008 as members of the Texans' coaching staff for two years. Saleh also has said he was the best man at Matt's wedding and vice versa — although the two recently clarified on The Ringer's “Flying Coach” podcast with Rams coach Sean McVay and NFL Network's “Good Morning Football” host Peter Schrager that it was actually an “unofficial” designation, and their brothers were the “official best men” at their respective weddings.

“Saleh wanted to create headlines,” Matt LaFleur joked on the podcast. “So he told some reporter that.”

Meanwhile, Mike LaFleur was beginning his coaching career. There were stops at Elmhurst University, Saint Joseph's College and Davidson before he landed his first NFL job in 2014 — as an intern with Cleveland, where Kyle Shanahan was the offensive coordinator.

He followed Shanahan to Atlanta, where he spent two seasons as an offensive assistant and worked with his brother, who was the quarterbacks coach. When Shanahan became San Francisco's head coach in 2017, LaFleur joined him as the 49ers' passing game coordinator and wide receivers coach.

And on the other side of the ball was a familiar face in Saleh, who was the defensive coordinator.

“Getting to work with him in San Francisco, that’s when my respect for him as a worker — I mean, he’s very, very smart, but he’s an incredible worker and he’s really good with the players and he’s truthful,” Mike LaFleur said.

When Saleh was hired as the Jets' coach in January, he didn't have to look far to find the person he wanted to run the offense.

“When he had the opportunity, he asked me and it was a no-brainer because of the respect I have for him,” LaFleur said.

Now the two are tasked with trying to turn around a Jets franchise that has the NFL's longest current playoff drought at 10 seasons. And LaFleur's biggest task will be handling the development of Zach Wilson, the No. 2 overall pick in the draft last month.

“Everyone’s familiar with the whole Shanahan system and what he’s been able to create,” Saleh said. “Mike LaFleur has been with Kyle for, I think he’s going on eight years now of professional football, which has been his entire career and nobody in the world knows it better than he does.”

The Jets see Wilson as the perfect fit for the scheme, a West Coast-style of offense that uses lots of play-action and needs the quarterback to quickly adapt to a moving pocket and throw on the run. Wilson checks all those boxes, and his ability to throw passes at multiple arm angles is a plus.

LaFleur has worked with Wilson during rookie camp and organized team activities, and is pleased with the progress the 21-year-old signal-caller is making — calling him a “junkie” when it comes to watching film. Wilson has felt comfortable working in the system, clicking with LaFleur's coaching and style.

“The biggest thing that I like about the offense is one play complements another and then another and another,” Wilson said. “And it keeps the defense on their toes.”

While he helps Wilson acclimate to playing in the NFL, LaFleur is paving his own way as a first-time offensive coordinator.

Those days of fighting over the remote and seconds at the dinner table might be just fun memories. But LaFleur closely watched the path his brother — his “idol” who is eight years older — took to succeed and hoped he could someday follow.

“There’s no one that I’ve ever been around that works as hard as he does,” Mike LaFleur said. "It’s like there’s 25 hours in the day for him. And then at the same time, he doesn’t blink. It’s like he’s never tired, either. I always say that I wish I could work as hard as him, but I don’t know if I can.

"He’s wired a little bit different, but I strive to and it’s something I’ve really always looked up to.”