Raiders picked to be featured on 'Hard Knocks' 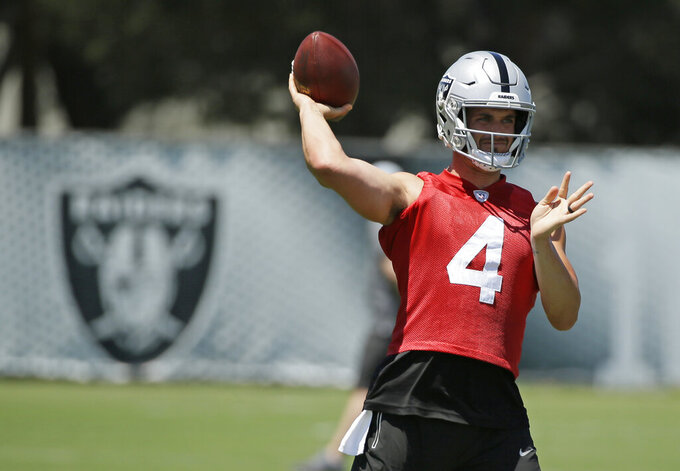 HBO announced Tuesday that the Raiders will be featured on the network's "Hard Knocks" show in training camp this summer that gives a behind-the-scenes look at an NFL team.

Gruden spent nine seasons as the lead analyst on ESPN's "Monday Night Football" before returning to the sideline for a second stint as Raiders coach last year. Now he will likely be a star of the 14th edition of this reality show.

"Everybody wants to be a Raider," owner Mark Davis said. "Now they'll find out what it takes to become one."

The Raiders made several high-profile additions this offseason that made them an attractive team for the show in their final scheduled season in Oakland before a planned move to Las Vegas.

Gruden had expressed reservations about being on the show but the Raiders were one of five teams who could be forced to do the show because they didn't make the playoffs the past two seasons, didn't have a new coach and hadn't done the show the past 10 years.

NFL Films will send a 30-person crew to training camp in Napa to shoot more than 1,750 hours of footage for the series with access to meeting rooms, training rooms, living quarters and practice fields.

"They do a really good job of staying out of your way," said defensive coordinator Paul Guenther, who was on the staff in Cincinnati when the Bengals were featured on the show.

"You can see, kind of, what's going to be on the show. I think the positive thing is you find out a lot about your team and the coaches on the staff that, 'Hey, when the camera is on you are you going to be a different guy or a different player or if you're not.' Because really after the third day, you don't notice, you're so used to having them around that you just go about your business."

The other teams that were eligible were San Francisco, Washington, Detroit and the New York Giants.

The first of five episodes will air Aug. 6.