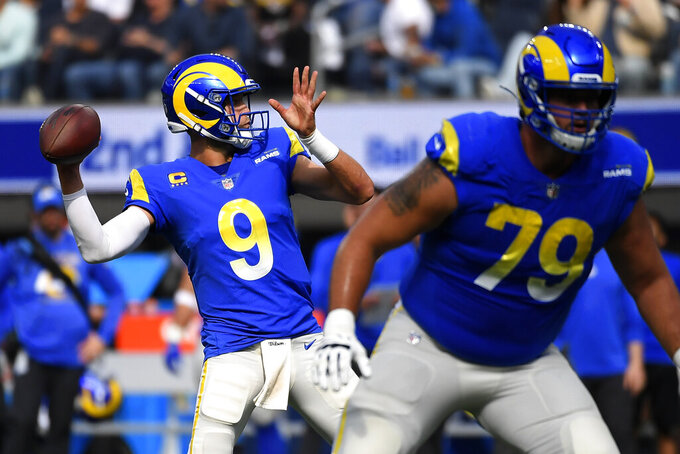 HOUSTON (AP) — Matthew Stafford’s stellar play has the Los Angeles Rams rolling as they prepare to visit the Houston Texans.

“There’s not many things he’s not doing well, and that’s a real positive,” coach Sean McVay said. “I think that’s a big reason why we are where we are right now.”

Stafford ranks third in the NFL with 2,179 yards passing and his 19 TD passes are second to Tom Brady’s 21. The 13-year veteran doesn’t worry about his statistics and is solely focused on making sure the offense is effective.

“I want every play that we run for the defense to feel pressure and for us to execute at a high level. So, I’m trying to do that,” he said. “If I can do that, I know I’ll be doing what I’m supposed to be doing for our team.”

While the Rams (6-1) have won three straight in their first season with Stafford leading the offense, the Texans (1-6) have dropped six in a row behind the struggles of rookie quarterback Davis Mills.

Injured starter Tyrod Taylor returned to practice this week for the first time since hurting his hamstring in Week 2, but isn't ready to play, leaving Mills to start for Houston.

Taylor opened the season as Houston’s starter with Deshaun Watson sitting out amid a trade request and 22 lawsuits alleging sexual harassment or assault. Taylor led the Texans to a win in the opener against Jacksonville before he was injured in the second quarter of a loss to Cleveland Sept. 19, and rookie Mills took over after halftime.

Things have only gone downhill for the Texans since as their lackluster offense has led to their longest skid since dropping the last six games of the 2017 season.

Coach David Culley knows dealing with Stafford and the Rams will be difficult, but said they’re less worried about the opponent than they are about fixing their many mistakes.

The Texans’ offense could have a chance to exploit an unusual personnel change on the Rams’ defense.

Rookie linebacker Ernest Jones has only played 45 defensive snaps, but is likely to be the man in the middle after Los Angeles’ abrupt trade Monday of second-leading tackler Kenny Young to create about $1.3 million in cap space. The curious move reflects the Rams’ belief in Jones and in starter Troy Reeder, who will also have more responsibilities.

Jones plans to get plenty of friends and family into Houston from his native Georgia for his first big game.

Running back Mark Ingram, who started the first seven games for Houston, was traded to New Orleans on Wednesday. The move appeared to anger veteran Brandin Cooks, who leads the team with 502 yards receiving.

Moments after news of the trade broke Cooks tweeted an expletive followed by: “Such a joke.”

The Texans are among the league’s worst teams and recent moves seem to indicate that they’ve given up on this season and are focused on developing young players with an eye toward the future.

Stafford has been excellent in almost every situation this season, but he and the Rams are particularly effective against the blitz.

According to Next Gen Stats, Stafford is 48 of 64 for 698 yards and eight TDs when facing blitzes this season, racking up a 151.3 passer rating. Los Angeles’ offensive line also has allowed just seven sacks.

The Texans are near the middle of the NFL pack with 14 sacks and a solid defensive front, but even with their sketchy performances in the secondary, blitzing probably isn’t the answer – although the discussion changes if Rams left tackle Andrew Whitworth can’t play or is limited by his knee injury.

All eyes will be on the Rams’ special teams after an embarrassing performance last week in LA’s 28-19 win over Detroit.

The Lions recovered an onside kick in the first quarter and later successfully faked two punts, leading them to an early 10-point lead and allowing the winless club to hold a lead into the fourth quarter. The Rams overcame the mistakes, but special teams are a concerning area for the second straight season.

Kicker Matt Gay has wobbled in effectiveness while battling injuries, and rookie Tutu Atwell hasn’t been able to cement his job as LA’s punt returner. In a rare public rebuke of a player, McVay even said Wednesday he would like to see “a little bit more increased sense of urgency” from Atwell.