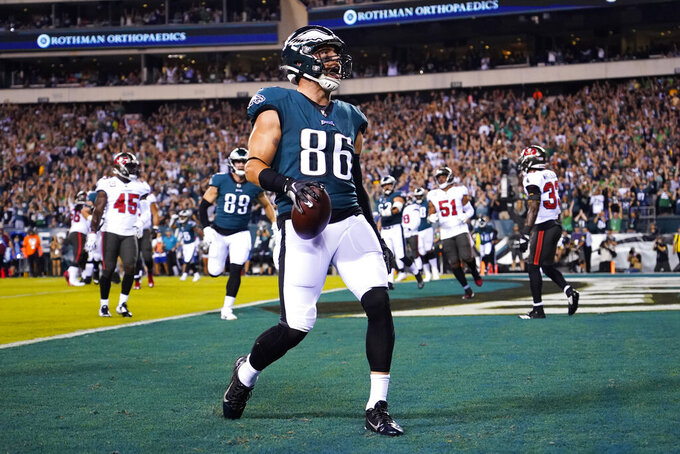 Philadelphia Eagles tight end Zach Ertz (86) celebrates a touchdown during the first half of an NFL football game against the Tampa Bay Buccaneers on Thursday, Oct. 14, 2021, in Philadelphia. (AP Photo/Matt Rourke)

But first, the connection started on a plane.

Ertz, traded to the Cardinals last week after more than eight seasons with the Philadelphia Eagles, made it to Arizona in time to fly with the team to Cleveland for last weekend's 37-14 victory over the Browns. His assigned seat for part of the trip was right next to Murray.

“I don't think that was an accident,” Ertz said, grinning.

The Cardinals moved quickly to add Ertz, sealing the deal with the Eagles less than a week after losing tight end Maxx Williams to a season-ending knee injury on Oct. 10. Ertz is a three-time Pro Bowl selection, has caught 38 touchdown passes in his career, and helped the Eagles win the 2017 Super Bowl.

Now he'll join an offense that's been among the best in the NFL. Arizona has a 6-0 record for the first time since 1974 and is the league's final undefeated team.

“It was a really good conversation,” Murray said of meeting Ertz. "I've only known him a couple days but it's one of those things where you kind of click with a dude. I think our relationship should grow quickly. He's obviously one of those guys who has a lot of feel for routes, zones and all that stuff. I don't worry about him being open or anything like that.

“I think he'll fit in perfectly.”

The 30-year-old Ertz has a lot of connections with the Cardinals already. He's good friends with Jordan Hicks from their time together in Philadelphia and was in the linebacker's wedding a few years ago. He's also had a long friendship with starting left guard Justin Pugh.

A little familiarity is nice for Ertz, who had an “emotional” split with the Eagles.

“I wore red in college so i guess the transition was as drastic,” Ertz said. “Being at Stanford, we were the Cardinal, so that's not too far from Cardinals. But I'm excited to be here. What an opportunity to be on this football team.”

Now Ertz is trying to find his niche in an offense that already includes receivers DeAndre Hopkins and A.J. Green, who have a combined 12 Pro Bowl appearances in their careers.

“All three of us have had a lot of success individually in this league,” Ertz said. “But the most fun thing I’ve ever been a part of is winning a Super Bowl. To me, that’s what separates all the seasons I’ve played. I’ve played eight years in the NFL, by far the most fun I’ve had is winning the Super Bowl."

Ertz's life has been thrown into chaos for a different reason, but he's ready for the challenge.

“I think the one thing a lot of great players can do is compartmentalize things, and you have to as an NFL player,” Ertz said. “So all my focus right now is learning this playbook, meeting the guys, being the best tight end and player I can be for this team.”