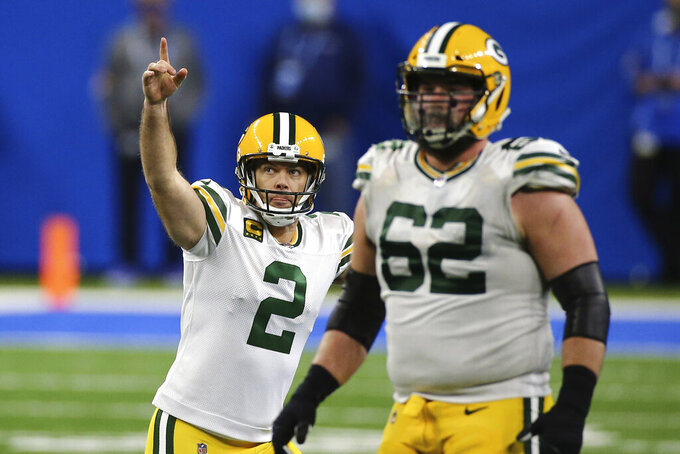 Green Bay Packers kicker Mason Crosby (2) reacts after making a 65-yard field goal during the second half of an NFL football game against the Detroit Lions, Sunday, Dec. 13, 2020, in Detroit. (AP Photo/Leon Halip) 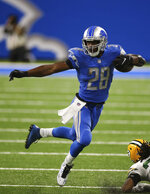 DETROIT (AP) — Aaron Rodgers has played for the NFC championship four times without having his cleats in the turf at Lambeau Field once.

He hopes to change that fact next month.

Rodgers ran for a tiebreaking score in the third quarter and threw three touchdown passes, lifting the Green Bay Packers to a 31-24 win over the the Detroit Lions to clinch the NFC North title.

The Packers (10-3) also moved into the top spot in the NFC. That gives them a shot to have home-field advantage on a potential path to the conference's only bye in the NFL's pandemic-altered postseason format — and maybe to the Super Bowl.

“To have the whole thing come through Green Bay is something we’ve talked about for a long time," Rodgers said. “That would definitely be in our favor with the weather that we have in Green Bay.

The New Orleans Saints lost to Philadelphia to fall back into a tie with Green Bay atop the NFC, and they would lose a potential tiebreaker because they lost to the Packers earlier this season. Green Bay repeated as division champion with its win and Minnesota’s loss to Tampa Bay earlier in the day.

The Lions (5-8) lost Matthew Stafford in the fourth quarter with a rib injury, but their latest setback was tied to their inability to stop Rodgers.

The two-time MVP and one-time Super Bowl champion completed his first eight passes for 119 yards and two scores. Rodgers finished 26 of 33 for 290 yards, three TDs and did not throw an interception for a third straight game.

“He should be the front-runner for the MVP," Green Bay coach Matt LaFleur said.

Rodgers ran 6 yards untouched to put the Packers ahead 21-14 for his 30th career rushing TD to break Tobin Rote's team record for a quarterback.

He extended his touchdown reception streak to eight games, turning a short pass from Rodgers into a 56-yard touchdown to pull into a 7-7 tie in the first quarter. Adams broke the franchise record set by Hall of Famer Don Hutson, who had a pair of seven-game streaks in the 1940s. He finished with seven catches for 115 yards.

“He’s such a difference maker and commands so much respect and dictates coverage," Rodgers said.

Rodgers also threw a 14-yard TD pass to Marquez Valdes-Scantling’s back shoulder to put the Packers ahead 14-7 in the opening minute of the second quarter. Tight end Robert Tonyan made his ninth TD reception early in the fourth quarter.

Stafford went toward the team's locker room in the fourth period, returned to the field to throw some passes, then retreated out of view again. Lions interim coach Darrell Bevell said it was too early to know how significant Stafford's injury was, adding the team would know more Monday after X-rays.

“He’s one of the toughest kids in this league," Bevell said.

Chase Daniel replaced Stafford and led a drive that ended with Matt Prater's 32-yard field goal with 1:49 left to pull the Lions within seven points. The Lions' comeback hopes were dashed when the ensuing onside kick didn't go 10 yards and Rodgers completed a pass to convert a third down on his final possession.

Rodgers directed a 14-play, 8:49 possession and took advantage of penalties to open the second half and his 6-yard run gave Green Bay a 21-14 lead. The Packers ran 21 plays in the third period for 143 yards, while the Lions had just three snaps on offense and gained just 4 yards.

“That’s a really tough spot for our defense," Daniel said.

Green Bay made it a two-score game with 3:30 remaining on Mason Crosby’s 57-yard field goal and celebrated with him in a place where he hasn't always had success. Mason missed four field goals and an extra point in a 31-23 loss at Detroit in 2018.

“He hasn’t kicked the way he wants to in this building," Adams said. “It says a lot about him and the mindset to move past what happened before. We obviously needed that. It was big.

Packers: CB Chandon Sullivan (hip) was hurt during the game and LaFleur said DE Rashan Gary, who had one sack, had his playing time limited because of an undisclosed injury.

Lions: Stafford hurt his ribs and CB Darryl Roberts left with a hip injury in the third quarter.