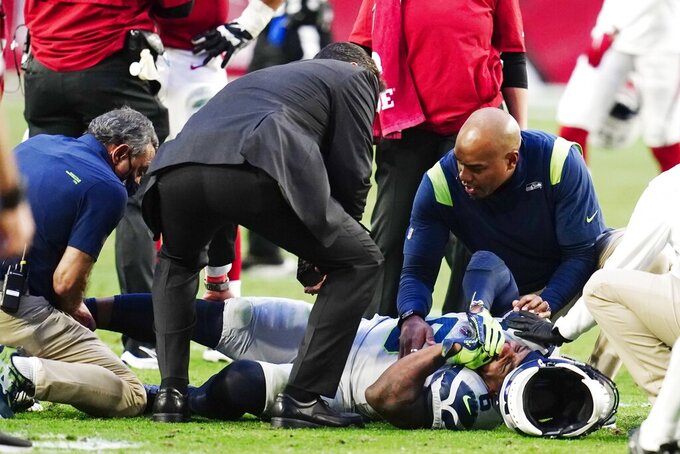 An injured Seattle Seahawks free safety Quandre Diggs grimaces as he is attended to by Seahawks training and medical staff during the second half of an NFL football game against the Arizona Cardinals Sunday, Jan. 9, 2022, in Glendale, Ariz. (AP Photo/Darryl Webb) 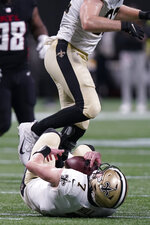 Seattle Seahawks Pro Bowl safety Quandre Diggs was carted off the field with a broken right leg and dislocated ankle in an emotional scene in Arizona on Sunday, and New Orleans Saints quarterback Taysom Hill left a game against Atlanta with a left foot injury and didn’t return.

“Just a heartbreaker because everybody loves who he is,” Carroll said after the Seahawks beat the Cardinals 38-30 to spoil Arizona's shot at the NFC West title. Tyler Lockett — who described Diggs as his best friend — said he was staying in Phoenix on Sunday night to make sure Diggs had support.

Diggs appeared to slip on the grass just before being blocked early in the fourth quarter and immediately grabbed his leg. Players on both teams were visibly upset as Seattle’s trainers worked on Diggs, and teammate D.J. Reed threw his helmet.

Diggs was in tears as he was carted off. He made his first Pro Bowl this season and is set to be a free agent this offseason. He led the Seahawks with five interceptions and was third with 63 tackles before Sunday’s game.

The Saints beat the Falcons 30-20, but missed the playoffs. The Saints were up 7-6 with about six minutes left in the first half when Hill departed after hurting his foot on a 1-yard run. Hill went into the Saints’ sideline medical tent before being escorted to the locker room. Trevor Siemian took over and threw a 13-yard touchdown pass to Tre’Quan Smith.

San Francisco 49ers punter Mitch Wishnowsky was sidelined in the first half at the Los Angeles Rams by a concussion, forcing placekicker Robbie Gould to punt. Gould kicked a 24-yard field goal with 2:45 left in overtime to help the 49ers beat the Rams 27-24 to clinch a playoff spot, and he was efficient with his punts.