Second half of Washington's season a referendum on Heinicke 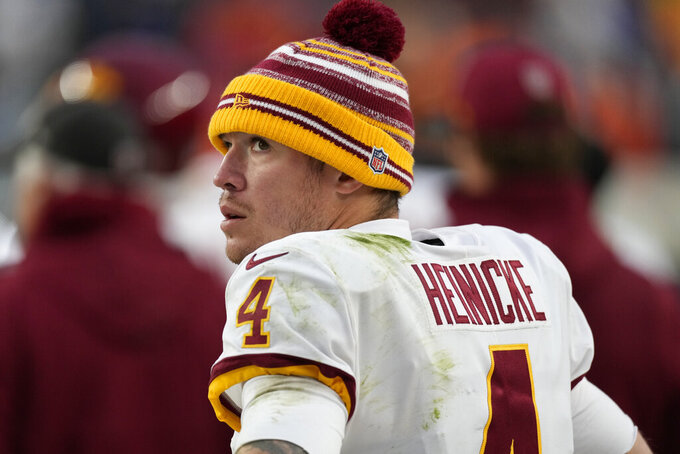 Washington Football Team quarterback Taylor Heinicke (4) during the second half of an NFL football game against the Denver Broncos, Sunday, Oct. 31, 2021, in Denver. The Broncos won 17-10. (AP Photo/David Zalubowski)

Washington is halfway through the season but nowhere closer to figuring out its future at quarterback.

Ron Rivera knows better than anyone else.

The answers to those questions lie with the play of Taylor Heinicke. The 28-year-old has nine NFL starts on his resume, projected starter Ryan Fitzpatrick is injured, and the rest of Washington's season might as well be a referendum on Heinicke's future.

In seven-plus games this season, Heinicke has completed 63.9% of his passes for 1,928 yards, 11 touchdowns and nine interceptions. Washington is 2-6.

“I give it my all and that’s all I can do,” Heinicke said when asked if he thought he deserved to remain the starter. “I control what I can control, and I feel like I’ve gotten better throughout the weeks and I feel like it’s just not been enough lately.”

Washington has the worst red-zone offense in the league despite moving the ball relatively well up until that point. On the plus side, Heinicke has rushed for 232 yards and given the unit an element of unpredictability that did not exist under Alex Smith and countless previous starters, and likely would not have materialized with Fitzpatrick.

Even if Fitzpatrick, who is scheduled for an MRI on his injured right hip this week, can play, he's only signed for this season and figured more to be a stopgap than the long-term solution. Heinicke is the ninth different QB to start for Washington over the past five seasons — including the failed first-round draft pick, Dwayne Haskins — and he's basically the team's only hope of not making it to a 10th in 2022.

The defense is getting better. After lofty preseason expectations made early-season struggles stick out, the pass rush has had an impact and first-round pick Jamin Davis is getting used to life as an NFL linebacker.

If the secondary can tighten up some things, Washington's defense can ascend to mediocre over its final nine games.

In Rivera's words, maturity. Now that an improbable run to a second consecutive NFC East championship looks out of reach, members of this young group can show their coach that they deserve to stick around.

“Right now we’re a young team that’s learning how to mature, and that’s what we’re at,” Rivera said. “We’re going to do the best we can to coach them up and we’ll see what happens.”

Defensive lineman Jonathan Allen has been one of Washington's leaders for a couple of years now, and he has been a standout so far this season. With six sacks, Allen has more than reigning AP Defensive Rookie of the Year Chase Young and fellow edge rusher Montez Sweat combined.

Allen is proving the front office right for signing him to a $72 million, four-year extension on the eve of training camp. Perhaps having the contract done is helping the 2017 first-round pick produce with less pressure on him.

One contract that has not worked out is wide receiver Curtis Samuel's $34.5 million, three-year deal signed in free agency. A lingering groin injury that began during offseason workouts has limited Samuel to two games, eight catches and 81 yards and could completely derail his season.

45.45 — Percentage of Washington's red zone trips that have resulted in a touchdown. Only one other team is under 50% on the season.

Heinicke gets his chance at revenge against Tom Brady and the defending Super Bowl champion Buccaneers, who he played well against in the wild-card round of the playoffs last season. It's a tall task: Tampa Bay opened as an 8 1/2-point road favorite on FanDuel SportsBook.