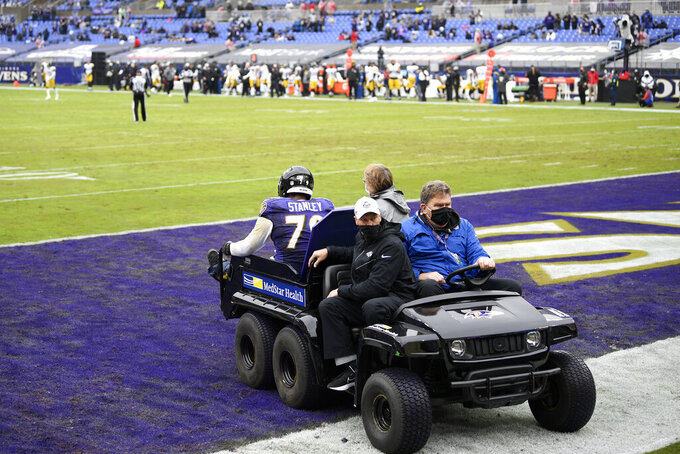 Baltimore Ravens offensive tackle Ronnie Stanley is carted off the field during the first half of an NFL football game against the Pittsburgh Steelers, Sunday, Nov. 1, 2020, in Baltimore. (AP Photo/Nick Wass)

The Baltimore Ravens are considerably short-handed at practice this week after moving two starting offensive linemen to injured reserve and placing eight players on the COVID-19 reserve list.

Coach John Harbaugh can only hope the situation improves in time for Sunday's key AFC clash on the road against the Indianapolis Colts (5-2).

Coming off a 28-24 loss to the Pittsburgh Steelers that dropped the defending AFC North champions two games out of first place, the Ravens (5-2) will face the Colts without left offensive tackle Ronnie Stanley and right guard Tyre Phillips. Both players were placed on injured reserve Tuesday after sustaining ankle injuries against Pittsburgh.

Baltimore also must find a replacement for All-Pro cornerback Marlon Humphrey, who has tested positive for the coronavirus and won't suit up. Following Humphrey's diagnosis, the Ravens put starting linebackers Patrick Queen, Matthew Judon and L.J. Fort on COVID-19 reserve, along with starting safety DeShon Elliott and reserve linebackers Malik Harrison and Tyus Bowser. Backup defensive back Terrell Bonds made the list, too.

The COVID-19 list was created for a player who either tests positive for the disease or who has been in close contact with an infected person or persons.

The seven players who joined Humphrey on the list have been isolated. If they test negative for the virus through Saturday, they'll be able to participate in the final walk-through and will travel with the team in Indianapolis, Harbaugh said.

Until then, the Ravens will fill the void at practice with backups, several of whom previously watched the proceedings from the sideline.

“Same number of reps, same process," Harbaugh said Wednesday. “It creates opportunities for a few younger guys and for some guys to play some different spots. You look at it as an opportunity to create versatility within the defense."

“We love to have our brothers out there in practice and getting ready for a game with us," Jackson said. “Unfortunately we can't because of the COVID. I can't wait for our guys to get back."

Because of Humphrey's positive test, the Ravens will conduct team meetings this week virtually. The players on the COVID list were expected to attend those meetings and work out on their own.

If they return to action Sunday, how they'll perform is anyone's guess.

“It’s impossible to predict," Harbaugh said. “You see guys who sometimes don’t practice all week and they come out and play the best games of their careers. Other guys struggle. I don’t spend a lot of time being anxious about that because it’s really kind of a waste of time."

Up until this week, the Ravens avoided the coronavirus and injuries to key players. But no team is safe, no matter what precautions are taken.

“We know that any given week you could be down a key player or key players,” starting strong safety Chuck Clark said. “We’ve been working on that in weeks prior just in case something like this were to happen, because that’s just what this 2020 season is."

“I don’t think it’s a challenge, honestly," Clark said. “It’s the next-man-up type of thing. The communication is all the same."

Orlando Brown Jr. will move from right tackle to Stanley's spot and Patrick Mekari will likely get most of the action at right guard. On defense, nine-year veteran Jimmy Smith will probably start for Humphrey.

Even if everyone on the reserve-COVID-19 list (besides Humphrey) gets to play, Baltimore's depth will be tested.

“People are excited for their opportunities," Harbaugh said. “Nobody wants to see somebody get hurt or whatever the case may be, but it’s an opportunity for the next man to go in there and play great."