Taylor Heinicke set to start again for Commanders at Texans 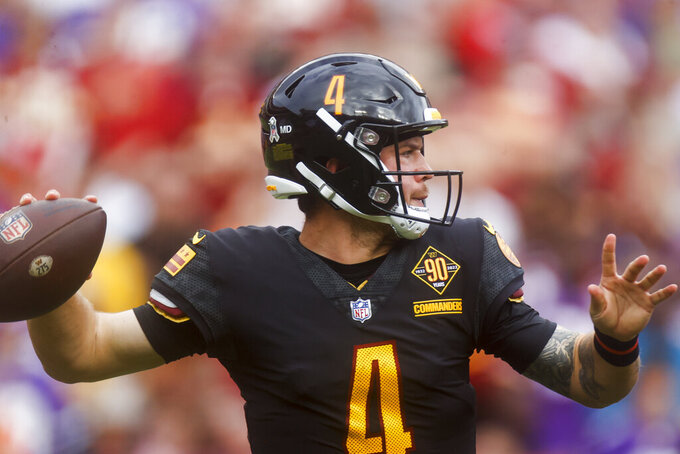 ASHBURN, Va. (AP) — Taylor Heinicke is set to start at quarterback again for the Washington Commanders when they visit the Houston Texans this weekend, coach Ron Rivera said Wednesday.

Carson Wentz did not take part in the team's walkthrough and instead worked out on an outdoor practice field. Rivera said Wentz has been cleared to throw but has not been designated to return to practice after having surgery to repair a broken finger on his throwing hand.

“We have time,” Rivera said. “That’s the really good thing that is on our side. (Heinicke has) done some good things, and we’ll see how it happens this week.”

Wentz would have be eligible to return this week after spending the past four weeks on injured reserve. Instead, Washington will keep rolling Sunday with Heinicke, who is 3-1 since replacing Wentz as the starter.

“Coach told me I was up this week, so I’m just doing everything I can to prepare for Houston and try and go get a win,” Heinicke said. “The team’s playing really well right now and I think, what, we got seven more games, so hopefully we can just keep this thing rolling and see what happens.”

The Commanders are in the thick of the NFC wild-card race at 5-5 after Heinicke helped them beat previously unbeaten Philadelphia on Monday night.

Heinicke celebrated the victory by purchasing a pair of Air Jordan sneakers in Eagles colors — and some others for the starting offensive line.

“Heck, if they keep doing that, they’ll be getting some more,” Heinicke said.

This is scheduled to be Heinicke's 21st start since joining Washington as quarantine quarterback in December 2020. He has thrown for 28 touchdowns and 23 interceptions, including five TDs and four picks this season while trying not to think too much about being back in a leading role.

“That just puts more pressure on yourself,” Heinicke said. “For me, it’s one of those things where I take it day by day and do the best I can, and I think that’s what kind of lets me play fast and free. When I kind of think about all those things like I did last year, I feel like I don’t play as well.”

Heinicke's winding road from college star at Old Dominion in the Football Championship Subdivision to bouncing around and out of the NFL has made him appreciate this opportunity.

“At the end of the day when I’m driving into the facility, I’m like, ‘This is a game that I grew up wishing to play, and it’s a game that young people play,’" Heinicke said. “It’s supposed to be fun, so I try and keep it very simple and fun.”