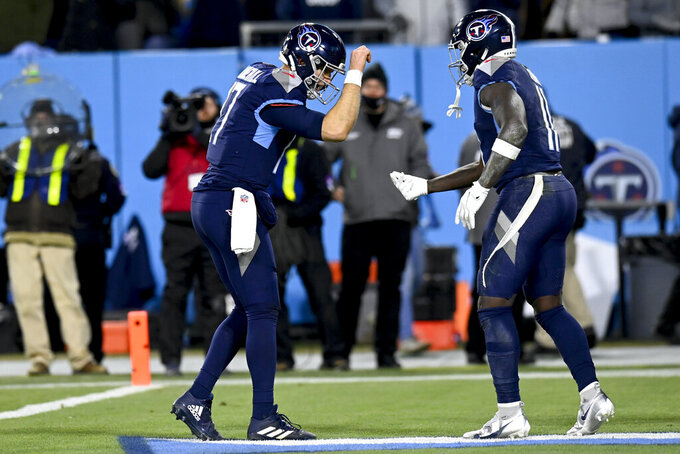 NASHVILLE, Tenn. (AP) — The Tennessee Titans have taken big steps in four seasons with coach Mike Vrabel reaching an AFC championship game and earning back-to-back AFC South titles along with a No. 1 seed.

Figuring out how to win again in the postseason if this franchise is to end a drought of reaching the Super Bowl now at 22 years and counting.

“We’ve won a lot of games ...," Vrabel said Monday. “But we haven't won a playoff game in two years and that's when you have to be at your best."

The Titans (12-6) have all offseason to dissect what went wrong after failing to take advantage of earning the AFC's top seed for the third time. Turnovers were key in almost all their losses, especially the three interceptions by Ryan Tannehill in their 19-16 divisional loss to Cincinnati.

Vrabel's 43 wins have tied him with Jack Pardee (1990-1993) for this franchise’s winningest coach through his first four seasons. The Titans have had three straight playoff berths, and their six consecutive winning seasons are second in the NFL only to the Kansas City Chiefs.

The Titans also have a core of young players, and both Tannehill, Derrick Henry and Julio Jones are under contract for another two seasons. That should keep this window open, especially with Vrabel saying he has no interest in going anywhere else.

"I’m disappointed, but I’m not discouraged because I know the type of people that we have here.” Vrabel said.

Vrabel and the Titans have a track record of being able to fix issues in one offseason.

A year ago, the defense was at or near the bottom in several statistical categories. General manager Jon Robinson swapped out a handful of starters, Vrabel gave the coordinator title to Shane Bowen and the unit made major improvements.

The Titans ranked second in run defense and sixth in both fewest points allowed and third-down efficiency. They just tied the NFL postseason record with nine sacks in a game.

“I definitely feel like the nucleus of this team, especially on the defense, we have the pieces there to have a championship defense to go out and win a Super Bowl," All-Pro safety Kevin Byard said.

Vrabel also defended Tannehill, whose contract and salary cap hit essentially ensure he’ll be back in 2022.

“We have to be great around him, but he’s shown signs of accuracy, of decision-making, to the ability to extend plays and scramble and leadership," Vrabel said. “So those are all things that you look for in a quarterback. And Ryan has showed us that.”

Yes, the Titans didn't have Henry for the final nine games, costing him the chance at a potential three-peat as the NFL rushing leader. They also used 91 players, most ever in an non-strike season.

The Titans took a step back in several categories in offensive coordinator Todd Downing's first season. Tennessee scored 13 fewer touchdowns and averaged 53.9 fewer yards, dropping from a tie for second in most yards in 2020 to 17th and from fourth in points per game to 15th.

They also allowed 22 more sacks, and Tannehill's interceptions doubled from seven to 14 not counting the three in the playoff loss. Vrabel called Downing a great coach and hard worker — not the endorsement Titans' fans want to hear coming off a postseason loss.

Some of the roster decisions facing the Titans will be easy.

Picking up the fifth-year option on defensive tackle Jeffery Simmons after he followed up a career-high 8 1/2 sacks with three more in the playoff loss is a no-brainer. Same with extending A.J. Brown, a Pro Bowl wide receiver in his second season who just set the franchise postseason record with 142 yards receiving.

Outside linebacker Harold Landry will be expensive to keep coming off a career-best 12 sacks, and he also had 1 1/2 sacks in the divisional loss. The Titans spent big on defense last year in signing outside linebacker Bud Dupree and defensive lineman Denico Autry.

Byard said he'd be happy to restructure his contract to free up space to keep Landry.

Left tackle Taylor Lewan missed four games with injuries a year after tearing an ACL, and his contract makes him a potential cap casualty or restructure target.

The Titans will pick 26th overall in April, and Robinson will have to have a draft closer to 2019 when he nabbed five starters with six selections, including Simmons and Brown. The Titans traded their 2020 first-round pick in March, and cornerback Caleb Farley, the top pick for 2021, played three games and tore an ACL in his one start.

By The Associated Press 21 minutes ago
By Arnie Stapleton 2 hrs ago
2 hrs ago
By W.g. Ramirez 12 hrs ago
By Dennis Waszak Jr. 15 hrs ago