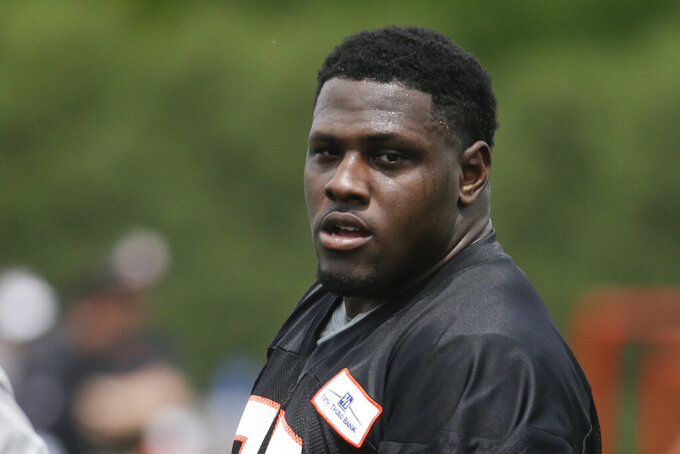 FILE - In this May 31, 2016, file photo, Cincinnati Bengals defensive tackle Andrew Billings (75) participates in NFL football practice in Cincinnati. Billings, who signed a one-year free-agent contract with the Cleveland Browns in March after spending three seasons with the Bengals, has opted out of the 2020 season because of coronavirus concerns. (AP Photo/John Minchillo, File)

NFL players who decide to opt out of the coming season must do so by Thursday afternoon, a person familiar with the agreement between the league and the players told The Associated Press.

There also are opt-out provisions for players who experience emergency or extenuating circumstances during the season due to the coronavirus, the person said, speaking to the AP on condition of anonymity Tuesday because the changes to the collective bargaining agreement have not been made public.

Those provisions would cover a player with a severe family situation related to COVID-19 or if he is diagnosed with a high-risk condition after Thursday's deadline.

Any player who opts out and is in the high-risk category will receive a $350,000 stipend for 2020, with his contract paused. Players in the voluntary opt-out category will get $150,000 in the form of an advance on a contract.

Another person with direct knowledge of the agreement between the league and the players' union said that relief in the 2020 salary cap is being provided to the 32 teams. If a player opts out, his contract is paused for a season. Any signing bonus that was being applied to the salary cap in 2020 now will be delayed a year.

So, if a player signed a four-year contract with a $16 million signing bonus, the bonus normally would be applied against the cap at $4 million per season for four years. But the $4 million for 2020 will not be applied for another year, even though the player has collected his full bonus.

Already, some four dozen players have opted out of playing due to the pandemic. By not applying any signing bonuses to 2020, several million dollars could be freed up for signing new players. That gives teams more flexibility should players contract the coronavirus and be unavailable.

“I think part of it is, when the player opts out their contract withholds," said Browns general manager Andrew Berry, "so even though there may be some (bonuses paid) earlier this year, that does apply it into the following season. So, I guess it is more a little bit ... shifting the accounting, so to speak. So probably the two years have been in conjunction with one another, but again it does allow us a little bit of flexibility this year.”

Previously, players who have no accredited seasons and undrafted free agents who fit into the high-risk category were not covered for the $350,00 stipend. Under the new agreement, they will be.

Another change will allow teams to activate a player from the practice squad on game day if it loses one because of the coronavirus. In previous seasons, the deadline to make such a switch was Saturday afternoon.

The league and union also set parameters for fines and suspensions for any personnel not adhering to health and safety protocols.