Artist to do renderings of draftees on stage at NFL draft 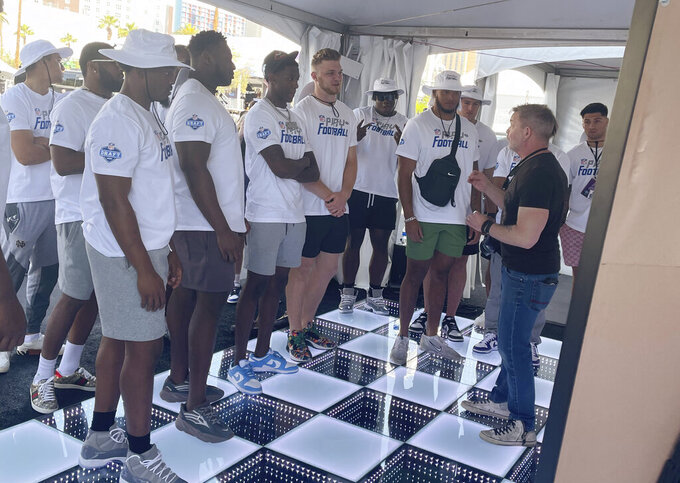 In a photo provided by Marc Ganis, artist Rob Prior explains to NFL draft prospects how he creates portraits, Wednesday, April 27, 2022, in Las Vegas. Prior will be painting portraits through the first round of the NFL football draft Thursday night and giving lithographs to each player. (Marc Ganis via AP)

LAS VEGAS (AP) — When some of the first-round picks at Thursday night's NFL draft are on stage with Commissioner Roger Goodell, they won't be alone.

Just look for the guy painting portraits — with both hands, no less — of the players.

Rob Prior, an acclaimed experiential artist from Los Angeles, will be customizing the portraits, a set of which later will be auctioned off by the NFL Foundation, with proceeds to benefit the organization's work in social justice, youth health and wellness initiatives.

Prior met and spoke to all 20 draft prospects on Wednesday. Behind him were portraits he created of a few of the recognizable people in popular culture, including a halftime performer at the Super Bowl in February: a painting of Snoop Dogg featuring a particularly penetrating gaze.

“The most important thing is to get a quick glance of their personality,” Prior said. “If I can't put their soul into a painting like this, you kind of lose what you are doing. The more I know about a subject the more I can get the painting right.”

So Prior has done his homework, learning about each of the players, and he's ready for what he says is a “weird trance” he goes into while creating. Each of the players will get a lithograph of Prior's work.

Although Prior mostly works with artists and musicians — he recently was selected to create the official painted portrait of eight-time Grammy Award winner Joni Mitchell at the 31st annual MusiCares Person of the Year benefit gala at the MGM Grand — this is not Prior's first foray into athletics.

“Boxing, along with football, are my favorite sports," he said, “and one thing I can capture in the portrait is those moments in the ring when it becomes magic. The most supreme part of sports is that movement."

So Prior, 57, created a portrait of Canelo Alvarez, widely considered the world's best boxer, and it drew enormous acclaim at last year's Art Basel in Miami.

Marc Ganis, the president of sports consulting firm Sportscorp Ltd., and a confidant to many NFL owners, hooked up Prior with the league. With the draft in Las Vegas, which bills itself as “the entertainment capital of the world,” Prior's appearances on stage during the first round just seem to fit.

“Rob is the LeRoy Neiman of this generation," Ganis said, "bringing high-end artistic interpretation to those magical and emotional moments of sports. Only he will be on stage creating art, live in front of the audience, two by two.”

When the players were told something similar to the works on display Wednesday would be given to each of them as a lithograph, they were surprised and definitely pleased.

“I will put that up on my wall,” Washington defensive back Kyler Gordon said.