Crossroad with Cousins? Reeling Vikings have some QB trouble 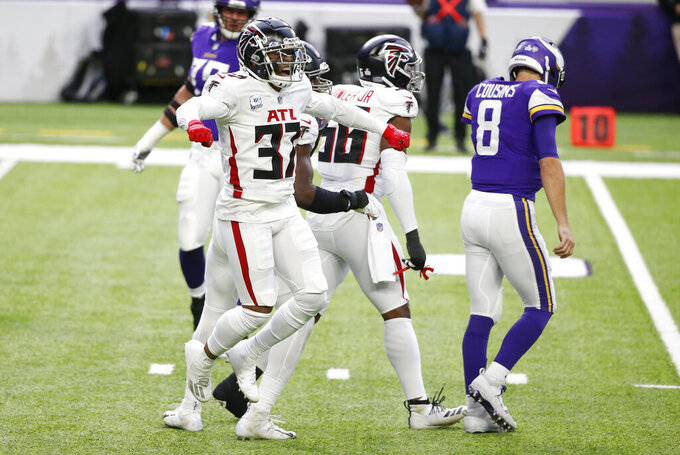 MINNEAPOLIS (AP) — Kirk Cousins dropped back on Minnesota's first snap of the game and zipped a pass over the middle for Justin Jefferson, the rookie who has fast become one of the NFL's most dynamic wide receivers.

The ball was slightly behind Jefferson as he crossed the field, but the accuracy on this play was hardly the problem.

Cousins, inexplicably for an accomplished quarterback whose overall performance last season was the best of his nine years in the NFL, delivered without hesitation into a crowd of four defenders. Linebacker Deion Jones, parked in the throwing lane, picked off the pass with minimal effort.

“I just don't understand the decision,” Fox analyst Darryl Johnston said during the network's broadcast on Sunday, when the Vikings trailed 20-0 at halftime after three interceptions by Cousins, and lost 40-23 to the previously winless Atlanta Falcons.

Cousins, in a sobering self-reflection after the game, didn't get it, either.

“I simply forced the football into coverage, tried to do too much. That’s a mistake I may have made in Year 1, but I’m disappointed that I would do that now,” said Cousins, who was picked off only six times in 2019 and now has a league-high 10 interceptions just six games into 2020.

The second turnover was a bit less egregious, but Cousins was still outfoxed by a rookie when cornerback A.J. Terrell left his man and jumped in front of a hitch route by Jefferson and made a juggling interception.

The third one wasn't his fault, forced when simultaneous contact by a pass rusher with his arm and the ball produced a wobbler that wound up in the arms of Foye Oluokon. Still, the damage done by the first three-interception first half of Cousins' career was too much to overcome for a Vikings team trying to renovate a once-dominant defense on the fly.

“The reality is if the pace I’m on in terms of the interceptions, if that were to continue, I won’t finish the season," Cousins said.

There's little doubt he'll stay on the field this year, because the Vikings have not carried an accomplished backup since signing Cousins to the landmark, fully guaranteed $84 million contract in 2018. His future with Minnesota, however, appears less clear.

The loss to the Falcons was so lopsided — surprisingly so after three straight strong games by the offense suggested contention for the expanded playoffs was still a possibility — it amplified questions about Cousins that were quieted last season.

“The thing that’s hurting us right now is we can’t turn the ball over as much as we’re turning it over," general manager Rick Spielman said. "But I know what I’ve seen since we’ve been here, and his ability to throw the deep ball down the field and his ability to run play-action and do all those things is what we felt was the best decision as we moved into last offseason.”

The $66 million extension the Vikings gave Cousins in March actually teed up another decision on his status in five months. If he's on the roster on the third day of the next league year, his $35 million salary for 2022 becomes fully guaranteed. Cousins would count heavily against the 2021 salary cap whether he's here or not, but keeping him for next season effectively means the Vikings must commit to two more years of market-rate, veteran-quarterback cap space allocation even if they were to decide to find a replacement in the next draft.

With Trevor Lawrence (Clemson), Justin Fields (Ohio State) and Trey Lance (North Dakota State) looming as a tantalizing trio of top quarterback prospects, perhaps next spring will be their best opportunity. Though the Vikings are currently one of nine one-win teams, just above the winless New York Jets, several of those competitors for high picks already have their franchise quarterback. Only twice in the last eight drafts have three or more quarterbacks been taken in the first round.

After reaching the NFC championship game for the 2017 season and getting routed by Philadelphia, the Vikings believed they had a strong enough roster and staff to spend big on Cousins yet not stake their entire Super Bowl bid on an overachieving quarterback who's never been in the league's top tier.

With running back Dalvin Cook entrenched as the focal point of the offense, Jefferson swapped out for malcontent Stefon Diggs and the revered Gary Kubiak taking over as offensive coordinator, the Vikings again set Cousins up for success even if the pass protection remained suspect. The Vikings have had a well-balanced, high-scoring unit in half of their games, but the other three performances were largely abysmal.

Without discriminating between sides of the ball, the lackluster game against Atlanta stunned coach Mike Zimmer one week after a crushing one-point defeat at unbeaten Seattle.

“If you lose a game, you shouldn’t have a letdown. You should put a foot on the grinder and get back to work,” Zimmer said.

Now the Vikings, in their bye week, have been handed extra time to be confronted with their shortcomings.

“It will give us a chance to kind of refresh to try to figure out individually, ‘What can I do better going into the next part of the season?’” wide receiver Adam Thielen said. “You really have to take advantage of this time with how we started. If we want to be a tough team and come back and get on a roll, we are going to have to all kind of self-evaluate.”

Including the front office, starting at quarterback.

“I don’t have any doubt that he’s going to be able to rally,” Spielman said, adding: “I don’t think anyone has lost any faith in Kirk Cousins. I expect him to come back after the bye week and play well for us.”