Eagles put aside drama, back on winning track 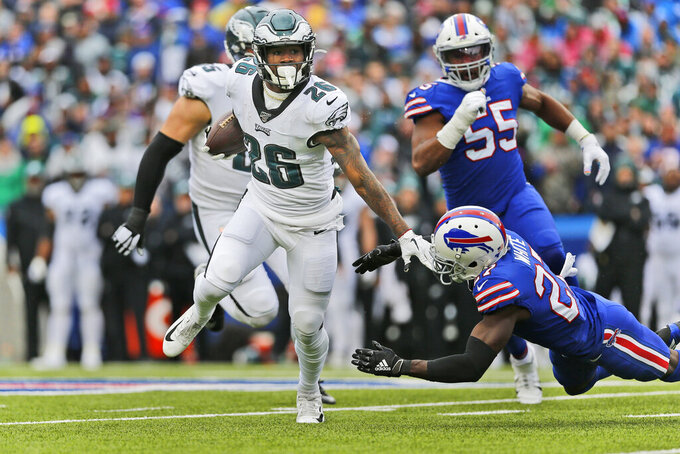 Philadelphia Eagles' Miles Sanders runs the ball during the first half of an NFL football game against the Buffalo Bills, Sunday, Oct. 27, 2019, in Orchard Park, N.Y. (AP Photo/John Munson)

PHILADELPHIA (AP) — The Philadelphia Eagles put aside all the drama and distractions to get back to winning.

After two weeks of answering questions about criticism from an anonymous source in the locker room and dealing with stinging comments from a former teammate, the Eagles snapped a two-game losing streak with a convincing 31-13 win at Buffalo.

They're 4-4 at the halfway point and right in the mix in a mediocre NFC East led by the Dallas Cowboys (4-3).

"I look at the way we practiced last week and the intensity that we had, and how our leaders really stepped up and handled the team," coach Doug Pederson said Monday. "Those are all positives that we can take forward into this week."

Just as they did on a Thursday night in Green Bay last month, the Eagles relied on their rushing attack. Jordan Howard and Miles Sanders ran for 170 of the team's 218 yards on the ground. Carson Wentz played well and made strong throws on a rainy, windy day.

The Eagles are 4-1 under Pederson when they have more yards rushing than passing.

"Obviously with not having DeSean (Jackson), that's definitely a possibility," Pederson said about emphasizing the run. "I look at the success we've had and some of the wins that we've had this year and the amount of points, I think we've been over 30 points in the four wins and part of that is due to the run game. So I think that's a formula for us.

"Being efficient in the passing game, as Carson was, and being able to manage that, and the other thing, too, we didn't get ourselves into a hole. We weren't down two scores in the game, so that's also a positive. Something that we've struggled with the last couple of weeks."

The run game has been the team's strength. Howard had 96 yards and one touchdown on 23 carries. Sanders had 74 yards on three carries, including a 65-yard TD. Boston Scott also had a 4-yard TD run. The offensive line is built to dominate opponents at the line of scrimmage so running the ball should be a priority especially because the wide receivers are mediocre without Jackson.

The Eagles need more production at wide receiver. Alshon Jeffery has 25 catches for 268 yards and two TDs over the past five games. But Nelson Agholor has only 11 receptions, Mack Hollins has one and rookie second-round pick J.J. Arcega-Whiteside has none.

Before he broke loose for his first career score, Sanders had been a bigger weapon as a receiver. He showed off his elite speed in the open field on the long run. The Eagles employed a two-back set on that run, a rare formation for them. It worked nicely as Howard paved the way with a lead block.

Hollins has played 189 snaps over the past five games and has only one catch. His playing time will decrease once Jackson returns from an abdomen injury suffered in Week 2.

Jackson is expected to return to practice Wednesday. Cornerback Avonte Maddox (neck) practiced Friday and should do more this week. Running back Darren Sproles (quadriceps) also could be on the field in practice. Linebacker Nigel Bradham (ankle) and defensive tackle Tim Jernigan (foot) are day to day. Left tackle Jason Peters (knee) remains out.

35:56 — The Eagles dominated time of possession against the Bills thanks to their success on the ground. They had a drive in the fourth quarter that lasted nearly nine minutes and concluded with a touchdown.

The Eagles begin a three-game homestand against the Chicago Bears (3-4). They'll have a bye next week before hosting the Patriots (8-0) and Seahawks (6-2).