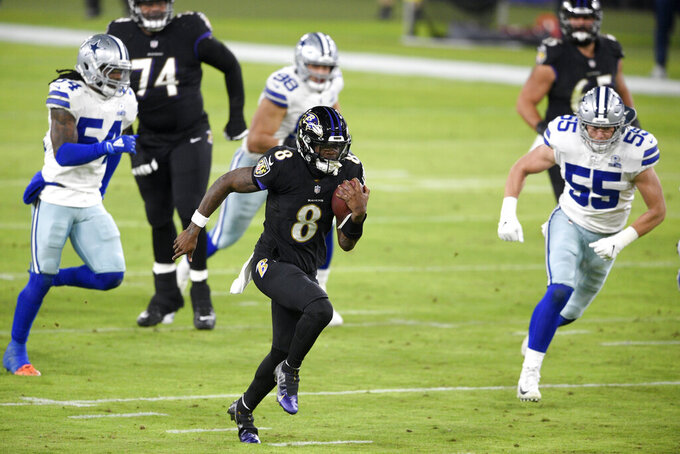 Baltimore Ravens quarterback Lamar Jackson (8) runs with the ball while scoring a touchdown on a keeper against the Dallas Cowboys during the first half of an NFL football game, Tuesday, Dec. 8, 2020, in Baltimore. (AP Photo/Nick Wass)

BALTIMORE (AP) — Back in action after a 15-day layoff, Lamar Jackson directed a relentless rushing attack that the Baltimore Ravens hope will be the first big step in a run to the playoffs.

Jackson ran for 94 yards and a touchdown, and the Ravens returned from a COVID-19 outbreak to amass 294 yards rushing in a 34-17 rout of the Dallas Cowboys on Tuesday night.

Playing for the first time since Nov. 22 following a positive test for the potentially deadly virus, Jackson carried 13 times and threw for two scores. He was one of 23 Ravens to spend time on the reserve/COVID-19 list while four different strains of the virus swept through the organization.

“I still can’t really taste or smell, but I’m good,” Jackson said. “I feel good to be back with my guys. It was like two weeks I ain't seen them."

Although the Ravens still have a half-dozen players on the COVID-19 list, the team felt complete for the first time in weeks.

“It’s like when you go on a family vacation and one of your family members get sick and you can’t bring them," rookie linebacker Patrick Queen said. “You’re down in the dumps.”

The game was played on Tuesday night because Baltimore's previous game — against Pittsburgh last Wednesday — was pushed back three times while the Ravens had at least one player test positive for 10 consecutive days.

Gus Edwards ran for 101 yards on just seven carries and rookie J.K. Dobbins — who also missed time on the COVID-19 list — added 71 yards rushing and a TD to help Baltimore (7-5) break a three-game skid and stay alive in its quest to reach the postseason for a third straight year.

“It’s a win we really, really had to have. It was a must-win," coach John Harbaugh said. “Running game was excellent. That was the key on offense.”

Dallas came in with the worst rush defense in the league, and it showed. The Ravens averaged 7.9 yards per carry and prevailed despite getting only 107 yards passing from Jackson.

“I think today was obviously a different challenge than we’ve seen," Dallas coach Mike McCarthy said. “This is a unique offense. A very physical offensive line and the dynamic of the combination of the running backs and Lamar."

The last-place Cowboys (3-9) have lost six of seven. Andy Dalton went 31 for 48 for 285 yards and two touchdowns, and Ezekiel Elliott rushed for 77 yards.

“I thought Andy managed the game very well," McCarthy said. “We needed to throw some bigger punches there and we needed to get on the board with touchdowns and we didn’t get that done."

The game was supposed to feature Ravens receiver Dez Bryant going against his former team, but Bryant left during warmups and was scratched with what Baltimore termed “an illness.”

Bryant wrote on Twitter that he tested positive for COVID-19 and later posted: “Yea I’m going to go ahead and call it a quit for the rest of the season... I can’t deal with this."

He subsequently posted a series of tweets, including, “Yea I’m coming back... I’m being smart."

Bryant scored 73 touchdowns with the Cowboys from 2010-17. He was signed by the Ravens in October and saw his first action in two years, catching four passes in three games.

On his first series following his unwanted week off, Jackson threw a pass that was tipped and intercepted. That led to a Dallas field goal, but Jackson answered with a 37-yard touchdown run on a fourth-and-2 play.

Tony Pollard took the subsequent kickoff 66 yards to set up a 13-yard touchdown pass from Dalton to Michael Gallup. It would be the last time Dallas led.

An interception by Queen set up a 38-yard touchdown pass from Jackson to Miles Boykin for a 14-10 lead.

Jackson's second TD pass of the game, a 20-yarder in the third quarter to Marquise Brown, made it 24-10.

If Jackson was rusty or stale after missing a game, it was tough to tell by his performance.

“The one thing you do know about Lamar: You’re going to get everything he’s got," Harbaugh said. “That’s all you can ask for."

Baltimore's Justin Tucker missed a 36-yard field goal in the second quarter, ending his NFL-record run of 70 straight successful FGs from inside 40 yards. ... The Ravens have rushed for 100 yards in 35 straight games, third-longest streak in NFL history. ... Baltimore has won nine straight over NFC foes, the longest active streak for one team against the other conference.

Ravens: Fullback Patrick Ricard left in the third quarter with a possible concussion but returned.

Cowboys: Another road game against an AFC North foe, at Cincinnati on Sunday.

Ravens: More prime-time action for Baltimore, against the host Cleveland Browns on Monday night. It's a rematch of the season opener won by the Ravens, 38-6.