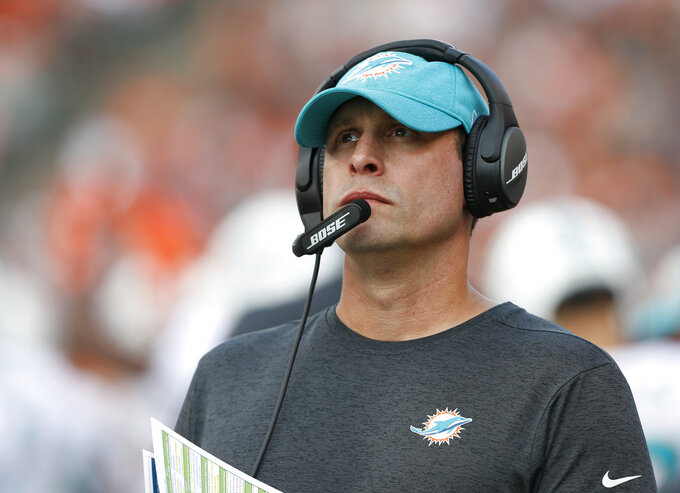 FILE - In this Oct. 7, 2018, file photo Miami Dolphins head coach Adam Gase stand on the sideline during the first half of an NFL football game against the Cincinnati Bengals in Cincinnati. Gase has been fired after three seasons as the Miami Dolphins coach, including a 7-9 finish this year. Gase confirmed his dismissal in a text message Monday, Dec. 31 to The Associated Press. (AP Photo/Gary Landers, File)

Gase is the second known meeting New York has had as it looks for a replacement for Todd Bowles , who was fired last Sunday night after he went 24-40 in four seasons.

The Jets spoke with Gase on Friday after interviewing Chiefs offensive coordinator Eric Bieniemy in Kansas City on Wednesday.

Gase was 23-26 in three seasons with Miami , including a playoff game in 2016, before being fired Monday. The 40-year-old coach worked as an assistant with Detroit, San Francisco and Denver before being promoted to offensive coordinator by the Broncos in 2013 and drawing rave reviews from Peyton Manning.

Gase followed coach John Fox to Chicago in 2015 to be the Bears' offensive coordinator. He was hired by the Dolphins as their head coach the following season.