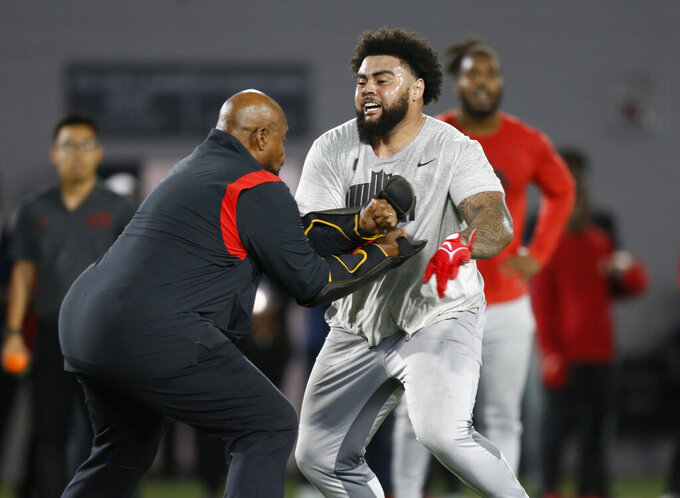 FILE - Defensive tackle Haskell Garrett, right, runs a drill during Ohio State football pro day in Columbus, Ohio, March 23, 2022. Josh Paschal and Garrett count themselves among the lucky ones. They understand only a tiny fraction of football players get a chance to play in the NFL, and even fewer overcome frightening experiences like theirs to become legitimate draft prospects. (AP Photo/Paul Vernon, File)

INDIANAPOLIS (AP) — Josh Paschal and Haskell Garrett count themselves among the lucky ones.

They understand only a tiny fraction of football players get a chance to play in the NFL, and even fewer overcome frightening experiences like theirs to become legitimate draft prospects.

Yet here they are, days away from making their dream careers a reality — careers that seemed so impossibly distant in 2018 when Paschal was undergoing monthly immunotherapy treatments for cancer in his right foot, or when Garrett was hospitalized in 2020 after being shot in the face. The two survivors were simply too persistent to let anything, even life itself, derail their plans.

“Being able to recover from that, it took a lot," Paschal said in March at the league's annual scouting combine, describing how he relied on his religious faith for help. "There was a lot of wisdom in those trials. It made me appreciate this (sport and life) even more. I’m beyond thankful to be here."

When the sophomore defensive end first heard the jarring diagnosis, malignant melanoma in August 2018, he was understandably shocked.

The highly-touted recruit from metro Washington played in all 13 games as a freshman and made his first career start in Kentucky's bowl game. He spent the offseason lifting weights, studying film, getting into the best shape of his life and dealing with a strange, lingering pain on the bottom of his foot. He thought it was blister. Instead, the 18-year-old was told he had cancer.

“I just had to keep going harder and harder every day to get back on the field and to the game I love,” Paschal wrote for the American Academy of Dermatology. “There was never any doubt in my mind I wasn’t going to play, because I was going to do everything in my power for me to come back and play with my brothers.”

His path was filled with struggles.

Paschal needed three surgeries in addition to the monthly treatments. He's still getting six-month checkups today. He also found a partner in the battle — Wildcats offensive line coach John Schlarman, a football alum who was diagnosed with a rare form of cancer the same day Paschal received his news.

Paschal returned to the field in November 2018, played three games and redshirted. Eventually, he became the first Kentucky player elected captain three times and now some expect the 6-foot-3, 278-pound defensive end to be a second-round pick.

“He is a solider. I give all my credit to that dude,” college teammate MarQuan McCall said at the combine. “He’s been through a lot. To see him at the combine, healthy, it’s a blessing. That’s my brother. That’s one of the guys I’m close with."

He didn't miss a game until October 2020 and rarely missed practices while receiving his own treatments. Then in November 2020, the 45-year-old Schlarman died.

It hit everyone hard.

“Coach Schlarman came to practice every day and hyped everyone up,” Paschal said. "He was the energy on the team. His legacy will never go away.”

On Aug. 30, 2020, Garrett was walking near the Ohio State campus when he saw a man and woman arguing. As Garrett tells it, the man started to get aggressive so the Buckeyes 6-foot-2, 300-pound defensive tackle intervened. That's when the man drew a gun and shot Garrett in the cheek.

Garrett walked to his apartment, called 911 and eventually needed multiple surgeries to repair holes in both cheeks, his tongue and a bone graft in his mouth. The Vermont native also lost five teeth and lived primarily on a liquid diet until he doctors inserted dental implants.

While the injuries were not life-threatening, those two nights in the hospital helped Garrett realize how fortunate he was — and what he might have done differently. It's a story and an answer he has recounted many times throughout the draft process.

“As an athlete, you see things and you want to help out," he said. “But sometimes it’s better to call the proper authorities and not take the approach you have to be hands on. Sometimes there are consequences to being hands on."

On the field, though, Garrett excelled.

He made it back for Ohio State's delayed season opener in October and played in all eight games of the COVID-19 pandemic shortened season. In fact, Garrett posted the best numbers of his career — though he was even better in 2021 after taking advantage of the NCAA's extra year of eligibility. Some believe he'll go in the third round.

But the shooting wasn't his first scrape with a tough situation. When Garettt's father died from stomach cancer, the teenager moved from Vermont to Hawaii to Las Vegas where he became a star player and a prized recruit.

All of it has helped the 23-year-old Haskell keep life in perspective.

“Without the adversity, I’m not who I am today,” he said. “It really fuels and drives me, and going through that has made me a better person, a better teammate and a better man in this world.”

Now after all the trials and tribulations, all the twists and turns, Paschal and Garrett are happy, healthy and hopeful as they wait to see when and where they'll incredible journeys take them next.

“When I first came back (in 2018), that first practice was my low point. That’s when I realized I was way further than I thought from where I wanted to be," Paschal said. "It took those 4 1/2 years of work. I’m blessed to be in this position and I’m seeing the fruit of my hard work.”