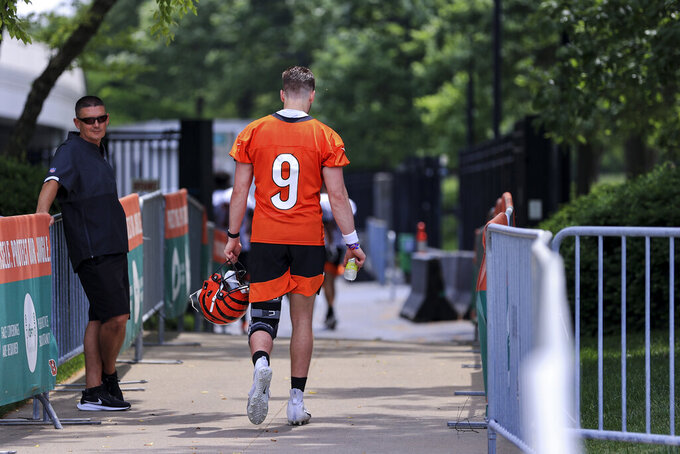 Burrow, who had surgery on his injured left knee in December, said he's brought it back to 80-85%.

Wearing a knee brace, he threw on the practice field Tuesday on the first day of organized team activities in which every eligible Bengals player took part.

“Still got to be patient,” Burrow said afterward. “Can’t push too hard. At this point it’s still how it feels, there are still good days and bad days. It’s still sore some days and so you will take it a little easy, and some days it feels really good and you’ll push it really hard. But we have a good (rehab) plan.”

Burrow has been throwing for weeks as part of his rehab, but got an opportunity Tuesday to throw to teammates, including fifth overall draft pick Ja'Marr Chase, his former teammate at LSU.

“We have been doing basically what I did out there today,” Burrow said. “We’ve been doing it basically for the last month. It wasn’t anything new, just with moving targets out there. Wasn’t any big step or anything like that. It was just fun to get back out there.”

Coach Zac Taylor acknowledged being “overly cautious” in not allowing anyone within 10 feet of Burrow to avoid any accidental collisions.

“It’s the first time I’ve gotten to see him to do that kind of stuff, so it was exciting for me,” Taylor said. “It’s good for the spirit of the team to see him back out there. We haven’t seen him practice in a long time, so that was a good sign for today.”

The 2019 Heisman Trophy winner and last year's top overall draft pick said his next benchmark is expected to come in training camp when he is cleared for contact.

“I’m at the point where I can — even if I wasn’t able to do everything, if my knee was less than what it is now — I would still want to be here and be around everybody and communicate and call plays in the huddle,” Burrow said.

“Because we have a lot of new faces on this team that need to see me there and see me working. It was really important for me to be here.”

Burrow was putting up passing numbers that had him in the early conversation for Offensive Rookie of the Year last season. He threw for more than 300 yards five times — including a 35-for-47, 406-yard performance in a three-point loss to the Browns on Oct. 25.

But his season came to a jarring halt Nov. 22 when he was hurt against Washington. The Bengals finished 4-11-1 behind two backup quarterbacks.

With the significant injury to his knee, a return for the opening game was never a sure thing. But Burrow said he's always been confident he'd be ready for the Bengals opener, and his rehab remains on track for that.

The excitement has been ramped up again in Cincinnati with Burrow's expected return and the addition of Chase, the receiver who was Burrow's good friend and favorite playmaker when LSU won the national championship in 2019.

The Bengals also have taken steps to shore up an offensive line that allowed too many quarterback hits last year.

“That’s what we decided to do as a team," he said. "I think that shows the rapport that everybody has with each other. We decided as a team that we were going to come and put the work in. Everyone showed up. That’s great. I think that bodes well for the season.”