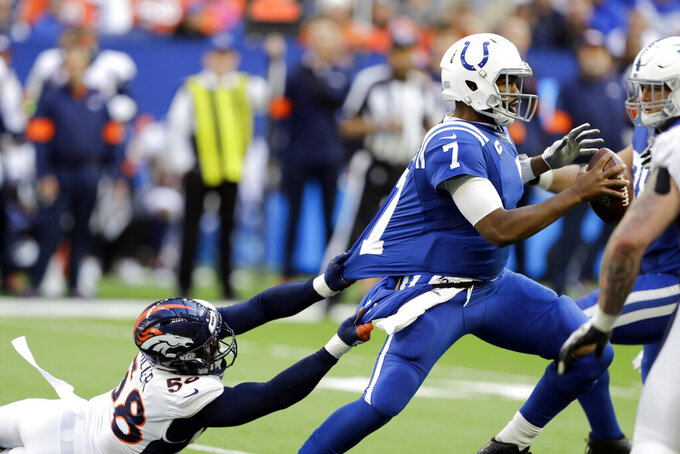 Indianapolis Colts quarterback Jacoby Brissett (7) runs out of a tackle by Denver Broncos outside linebacker Von Miller (58) during the second half of an NFL football game, Sunday, Oct. 27, 2019, in Indianapolis. (AP Photo/Darron Cummings)

He let the Indianapolis Colts' ground game set up the short passing game, connected with open receivers and even took advantage of open running lanes he found.

Then, when Brissett needed to make the big play, he did that, too. With less than two minutes to go, Brissett shrugged off perennial Pro Bowl linebacker Von Miller in the end zone, barely avoided stepping out of bounds for a safety and hooked up with T.Y. Hilton along the sideline for a 35-yard completion to start the Colts' winning drive.

Brissett and his teammates expected nothing less.

"Everything he did Sunday, I watched him do it in college," said running back Nyheim Hines, who played one season with Brissett at North Carolina State. "Even that play, with Von Miller, he's been doing that for a long time, probably as long as he's played. It just goes to show you the kind of player he is."

Hines and the Colts organization knew what Brissett could do if given the chance because they'd seen it repeatedly on the practice field for more than two years. So when Andrew Luck retired in August, the Colts simply moved on and embraced their capable new starter.

Two weeks ago, he delivered the best passing game of his career in a victory over Houston, throwing for 326 yards and four touchdowns to put the Colts (5-2) atop the AFC South.

Last weekend, he rallied the Colts from a 10-point, third-quarter deficit. He capped the comeback with a seven-play, 56-yard drive that consumed all but 22 seconds of the final 1:48, setting set up Adam Vinatieri's winning field goal . And it all started with Brissett's great escape.

"He's very confident in his ability and he's very tough to bring down," Hilton said. "Going out there and still being able to make that play — it was a pretty routine catch for me, but the throw was amazing."

At 6-foot-4, 238 pounds, he's big enough to toss aside pass rushers, nimble enough to evade others and buy extra time, and strong enough to throw deep on the run. On Sunday, the Pittsburgh Steelers (3-5) will get an up-close look.

And while he's willing to take chances, Brissett manages to limit the miscues.

As a result, Brissett already has matched his victory total from the first 19 starts of his career and his rating (99.3) puts him ahead of Tom Brady, Lamar Jackson, Philip Rivers, Carson Wentz, Jimmy Garoppolo and Jared Goff. His rating even is better than any single-season total Andrew Luck recorded.

"He can run, throw, do all the football stuff and he just enjoys playing, competing," left tackle Anthony Castonzo said. "He's got full command of the offense."

Knowing the system, which he scrambled to learn in 2017 after being traded to the Colts in early September, has allowed Brissett to evolve as a quarterback.

He is going through progressions quicker, making faster decisions and producing better results.

But Brissett's play on the field is only part of the equation.

Coach Frank Reich said Brissett reminded his teammates Wednesday that on their last road trip, to Kansas City, the offense committed no pre-snap penalties. Indy won that game 19-13, and the Colts expect to be equally disciplined Sunday.

"I feel like he's always been poised, even in college," Hines said. "And each week, he finds the right things to say. He always says something that can relate to all of us."

It's made a difference.

The Colts head to Pittsburgh with three straight wins, five victories by a total of 20 points and a chance to win their third consecutive road game — and there's nobody Indy would rather have behind center.