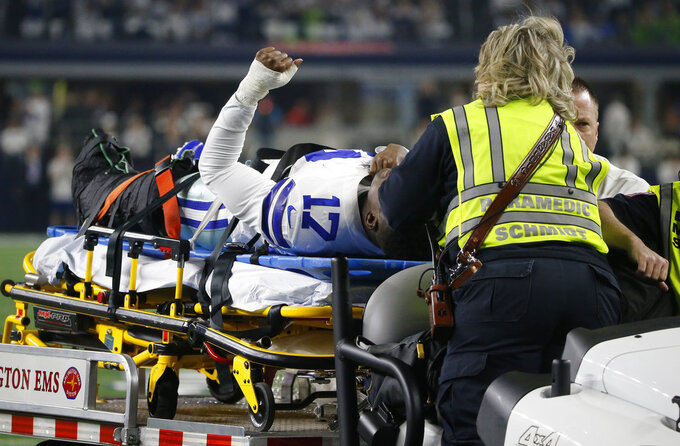 Dallas Cowboys wide receiver Allen Hurns (17) is taken from the field after injury against the Seattle Seahawks during the first half of the NFC wild-card NFL football game in Arlington, Texas, Saturday, Jan. 5, 2019. (AP Photo/Michael Ainsworth)

ARLINGTON, Texas (AP) — Dallas receiver Allen Hurns was in surgery for a broken left ankle, a gruesome injury sustained in the first quarter of the Cowboys' 24-22 wild-card win over Seattle.

Owner and general manager Jerry Jones said Hurns was "probably in surgery at this time" after the game Saturday night.

Hurns was being dragged down by Seahawks safety Bradley McDougald at the end of a 14-yard catch for a first down when his lower left leg appeared to buckle.

The 27-year-old Hurns writhed in pain on the turf as medical personnel rushed out to immobilize his leg. He was taken off the field on a cart after being placed on a stretcher, tears streaming down his face.

Several players from both teams crowded around the stretcher as Hurns was wheeled off. Hurns held up his left fist as the crowd cheered while the cart was driven off the field.

The Cowboys signed Hurns as a free agent in the offseason after waiving franchise career touchdown catches leader Dez Bryant in a cost-cutting move. With the catch against the Seahawks, Hurns had 21 catches for 309 yards with two touchdowns this season.