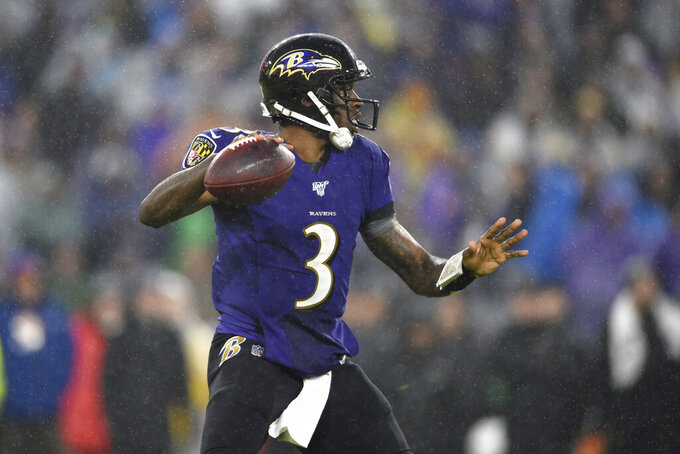 Baltimore Ravens quarterback Robert Griffin III throws a pass against the Pittsburgh Steelers during the first half of an NFL football game, Sunday, Dec. 29, 2019, in Baltimore. (AP Photo/Gail Burton)

BALTIMORE (AP) — Soaked to the core after standing the rain for well over three hours, coach John Harbaugh smiled broadly once the Baltimore Ravens wrapped up the finest regular season in franchise history by playing hard and effectively in a game that had absolutely no bearing on the team's playoff stature.

“That puts an exclamation point on an excellent season,” Harbaugh declared in the wake of the Ravens' 12th straight victory, a 28-10 rout of the Pittsburgh Steelers on Sunday.

The game meant far more to the Steelers (8-8) than the Ravens (14-2), who had already locked up the top seed in the AFC and rested seven key players.

No matter. Baltimore was looking to better the 13-3 record of the 2006 squad, and the Ravens never go easy when Pittsburgh comes to town.

“We definitely had to win this game. It means a lot to us to be 14-2 this year," cornerback Jimmy Smith said. “It's a Steelers game, too. It's not the Titans or something."

All seven players, six of whom were voted to the Pro Bowl, should return to action on the weekend of Jan. 11-12, when Baltimore opens postseason play following a first-round bye.

“This is the best team in football during the regular season. There's no doubt about that," Harbaugh said. “That's done. But that doesn't count anything toward the next season."

He was, of course, referring to the playoffs. Baltimore was eliminated in the opening round last year, but expectations are much higher this time around.

Pittsburgh entered the game needing help to fulfill its quest to become only the seventh team since 1970 to reach the playoffs after an 0-3 start.

The easiest route for Pittsburgh to qualify was a victory over Baltimore combined with a Tennessee loss to Houston. The Titans, however, won 35-14 to earn the final AFC wild-card slot. The Steelers could have gotten in with a loss, but all those equations included Tennessee losing.

Playing much of the season without their longtime leader, quarterback Ben Roethlisberger, the Steelers closed with a three-game skid in which they scored a collective 30 points. In this one, Pittsburgh could muster only 168 yards of offense.

“Obviously, not the way we wanted to perform today,” coach Mike Tomlin said. “Just disappointing, but there's been a lot of disappointments this season.”

Baltimore's first touchdown followed a fumble by Steelers rookie quarterback Devlin Hodges. The Ravens also scored on special teams when Steelers punter Jordan Berry couldn't handle the wet football and Jordan Richards recovered the fumble for a touchdown. Fifteen seconds later, the Ravens tacked on a safety when Hodges was called for intentional grounding in his end zone.

Benny Snell rushed for 91 yards and a touchdown in place of injured James Conner, but Hodges offered no air support. Hodges went 9 for 25 for 95 yards, and his fumble on a second-quarter sack set up an 8-yard touchdown run by Justice Hill for a 16-7 lead.

Justin Tucker kicked four field goals for the Ravens, who did just enough offensively with backup Robert Griffin III at quarterback. RG3 completed 11 of 20 passes for 96 yards and ran for 50 yards.

Jackson drew cheers from the drenched fans when he was featured on the scoreboard screen, smiling from under a hooded cape while seated next to Ingram. Jackson and Ingram are a big reason the Ravens set an NFL record for yards rushing in a season, topping the previous mark of 3,165 by the 1978 New England Patriots. The record now stands at 3,296 yards.

“But it's not a Super Bowl," Harbaugh said. “That's what they remember you for."

The old mark fell on a 9-yard run by Gus Edwards in the second quarter. Edwards finished with a career-high 130 yards on 21 carries, and Baltimore amassed 223 yards on the ground.

It was the ninth time the Ravens reached the 200-yard mark rushing. Hill chipped in with a career-best 39 and Griffin's 50 yards were his most on the ground since Dec. 1, 2013, with Washington.

Ravens rookie QB Trace McSorley made his NFL debut in the first quarter, gaining a yard and a first down to keep alive a drive that produced a field goal. The former Penn State star was inactive in Baltimore's first 15 games.

Steelers: Pittsburgh heads home after missing the postseason in successive years for the first time since 2012-13.

Ravens: Baltimore opens the postseason following a first-round bye for the first time since 2011. The Ravens enter the playoffs coming off a franchise-record 14-win regular season.