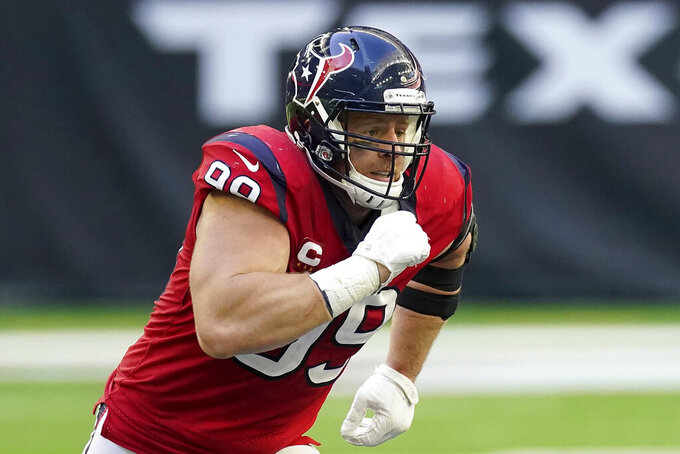 FILE - In this Dec. 6, 2020, file photo, Houston Texans defensive end J.J. Watt (99) rushes in during the second half of an NFL football game against the Indianapolis Colts in Houston. Watt and the Texans have “mutually agreed to part ways,” ending the tenure of the face of the franchise and adding another huge change to an offseason filled with upheaval. (AP Photo/David J. Phillip, File)

HOUSTON (AP) — Five-year-old Sawyer Brown was inconsolable. Her father, Chris Brown, had told her James Harden wouldn’t be with the Houston Rockets anymore after being traded to Brooklyn.

“I want James Harden to be on the Texas team,” she said, tears filling her eyes, in a video he shared on Facebook. Her dad went on to list other players on the team she could root for instead, but she was not having it. She just shook her head, her blonde hair bouncing across her face.

Sawyer, who has performed twice at Rockets games with her youth basketball program, hasn’t cared much about the team since.

“It’s been hard because James Harden’s very big to her,” said her mother, Ellie Brown. “He’s bigger than life ... he packs a lot of punch and she was especially fond of his beard. So, I think looking on the court now, she can just see ... how different everything is, and I think that it doesn’t have the pizazz. You can just see that she’s not interested.”

These are uncertain and depressing times for Houston sports fans. Harden’s messy departure was just another headline of bad news and the nine-time All-Star joined what has seemed like a mass exodus of superstar athletes from the fifth-largest metropolitan area in the nation.

Standout receiver DeAndre Hopkins was the first to go when former Houston Texans coach Bill O’Brien shipped him to Arizona for very little in return. Harden then forced a trade from the Rockets in January and Astros star outfielder and 2017 World Series MVP George Springer signed with the Blue Jays about a week later, another blow after the team was emboiled in a cheating scandal.

The biggest blow came when defensive end J.J. Watt asked for and was granted his release from the Texans before joining Hopkins in Arizona this week.

And after dealing with all that, fans are now bracing for the possibility they could soon lose Deshaun Watson too after the quarterback requested a trade amid turmoil within the Texans. O’Brien was fired after an 0-4 start last season and Houston sunk to 4-12 after winning the AFC South the previous two years.

John P. Lopez was a columnist for the Houston Chronicle for 17 years and has hosted a daily radio show on Sports Radio 610 in Houston since 2007. He said most of his callers believe the departures of Harden and Springer were inevitable but they are particularly disconsolate about their NFL team — and he can relate: "I legitimately cannot understand how a team that had that much going for it can become this dysfunctional almost overnight.”

“Sports are so emotional and personal, and I think people that have identified with the Texans just feel deceived and let down,” Lopez said. “People are legitimately, genuinely just crushed emotionally. They’re an emotional wreck that this is happening.”

Lopez, like many fans who call in to his show, blames the problems on executive vice president of football operations Jack Easterby, a former chaplain for the Patriots with no personnel experience who gained power in the wake of O’Brien’s dismissal. Anger has shifted to owner Cal McNair, who took charge of the team after his father Bob McNair died in 2018.

“McNair, I think, right now is as despised and resented as Bud Adams ever was in this city,” Lopez said, referring to the late owner of the Houston Oilers who moved that team to Tennessee.

Watt leaves as one of the most beloved figures in Houston sports history, a three-time NFL Defensive Player of the Year who did as much off the field as he did on it. His community efforts were unmatched, highlighted by raising more than $40 million for Hurricane Harvey relief.

Sports Radio 610, which is the flagship station of the Texans, set up the J.J. Watt Goodbye Hotline that received hundreds of messages. The station tweeted a 30-minute montage of the calls, with plenty of lighter fare like the man who planned to name his twins Jay and Jae and another who sang “I Will Always Love You.”

But several men sounded like they were choking back tears or actively weeping during their messages and one caller from Santa Fe, Texas, thanked Watt for paying for the funerals of the eight students and two teachers who died in a school shooting there in 2018.

Perhaps the most emotional call came from a 62-year-old man, who said he’d been a Houston sports fan for more than half his life.

“It hurts me,” he said between sobs. “Man, you did everything for us and I’m going to miss you. It’s gut-wrenching and mind blowing but I’ll quit my crying and just tell you how much I love you.”

The day after Harden’s trade, the owners of a local car wash offered a free wash to anyone willing to toss his jersey into a trash can when they arrived. Zishan Quresham, the owner of the ICarWash, said he was “heartbroken” over the trade and wanted to give his customers a way to vent.

The Rockets have bottomed out since Harden was dealt and have dropped 12 straight for their longest skid since losing 15 in a row in 2001. They will attempt to end the skid on Wednesday night at home, facing Harden and the Nets for the first time since the trade.

Harden may get a mixed welcome from the limited number of fans allowed inside. At a recent game, a group of young men milled around a rack of Harden jerseys at the team store with a sign that read “last chance items” and the price slashed from $125 to $25. One quipped: “I wouldn’t wear that if you paid ME $25” and the group walked off laughing.

For now, all eyes are on Watson, the dynamic QB of the Texans fans hope will stay. At a rally earlier this year outside NRG Stadium, one man held a large sign that read “SAVE WATSON” and several others clutched signs emblazoned with the hashtag referring to his jersey number “#IStandWith4.”

Houston Mayor Sylvester Turner has spoken at length about his admiration for the 25-year-old.

“I don’t know the details of his particular situation between him and the Texans, but Deshaun has been great for the city of Houston," Turner said. "I simply want him to know that this city appreciates him, we value him, and we respect him. Not just as a player but as a person.”

As for Sawyer, her parents have decided to use a different tack with the news that Springer and Watt are also gone.