Folk ready to kick, teach in return to Patriots 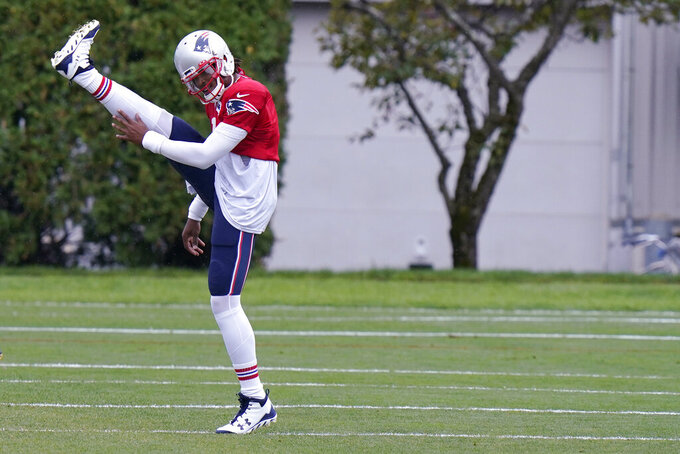 And he doesn’t mind being a mentor in the process.

The 35-year-old Folk was re-signed on Monday to compete with rookie kicker Justin Rohrwasser after the 2020 fifth-round pick struggled early in training camp.

“When he asks those questions, I’m pretty honest all the time. It’s just who I am as a person,” Folk said Thursday after practice. “I’ll help out where I can, but at the same time I know I have to do my part to make the team.”

Folk emerged as the starter in the second half of the 2019 season after the team tried out several veteran kickers following a season-ending injury to longtime starter Stephen Gostkowski.

Folk made 14 of 17 field goals and was perfect on kicks under 40 yards over seven games.

New England moved on from Gostkowski in the offseason, releasing the 14-year pro and franchise all-time leading scorer in March before drafting the 23-year-old Rohrwasser out of Marshall in April.

Rohrwasser began camp as the only kicker on the Patriots roster, but his inconsistency led the team to give Folk another call.

“That’s the hardest part with kicker, punter, snapper — there’s only one of us on each team,” Folk said. “So it’s hard to kind of give the tricks of the trade out there.”

Folk was a perfect 6 of 6 on field-goal attempts during Thursday’s combined team scrimmage, while Rohrwasser made 4 of 6 attempts. Folk has yet to miss a kick at practice since re-joining the team.

“Competition, I think, brings out the best in everyone,” Folk said. “(Justin is) doing pretty well, so I’m just trying to keep my head down, worry about my part and kind of let it all take care of itself.”

Folk said he had spoken with the Patriots as early as March, but initially decided to remain home with his wife and four young children in Dallas because of concerns about the COVID-19 pandemic.

“I trained the whole time like I was gonna play,” Folk said. “We kind of just put it on hold and just kept in contact, and it kind of made sense to come back this week.”

Folk added, “Thank God for the invention of FaceTime.”

Being absent for the early stages of Patriots’ camp did not seem to cost Folk on the chemistry front. During a lull in practice, Folk laughed and joked with longtime Patriots special teams captain Matthew Slater and others on the sideline.

Second-year quarterback Jarrett Stidham said the team discussed the possibility of not practicing Thursday after a wave of postponements throughout sports in response to Jacob Blake, a Black man, being shot by police in Wisconsin.

On Wednesday, the Milwaukee Bucks opted not to play Game 5 of their series against the Orlando Magic, leading to the postponement of all other NBA and WNBA games that night.

Three MLB games were also postponed, including the Milwaukee Brewers’ game against the Cincinnati Reds. The Detroit Lions also canceled their practice on Tuesday to protest the shooting.

NOTES: Stidham appeared to be a full participant Thursday after being limited with an injury earlier in camp. “Feeling good, and you know, just excited to be out there with the guys,” he said. … Stidham and Cam Newton split most of the reps at QB during the team’s 11-on-11 scrimmage, which included referees and stadium music. “We kind of wanted to simulate more of a game-like atmosphere,” Stidham said. … RB Damien Harris had the play of the day, going straight up the middle for a nearly 70-yard TD run. … OL Joe Thuney and CB Michael Jackson both left practice with apparent injuries. Thuney appeared to suffer a left hand injury. … S Devin McCourty, DL Beau Allen, WR Will Hastings, LB Cassh Maluia, RB Lamar Miller and LB Josh Uche were not spotted.