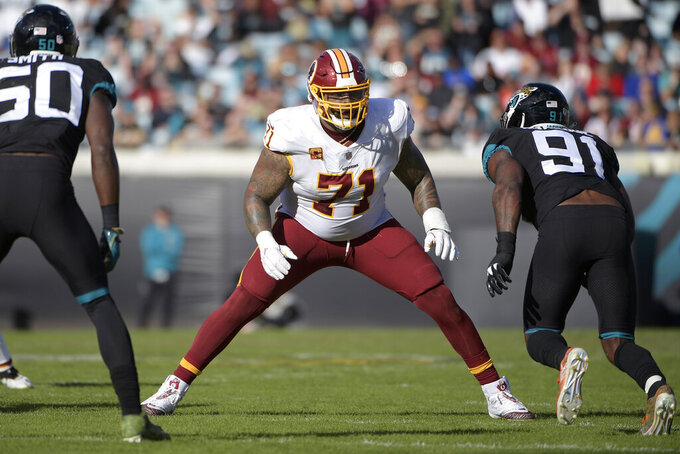 FILE - In this Dec. 16, 2018, file photo, Washington Redskins offensive tackle Trent Williams (71) sets up to block in front of Jacksonville Jaguars defensive end Yannick Ngakoue (91) during the second half of an NFL football game in Jacksonville, Fla. A person with knowledge of the situation says Williams has reported to the Redskins, ending his holdout. The person spoke to The Associated Press on condition of anonymity on Tuesday, Oct. 29, 2019, because the team had not announced Williams’ return. He can be kept off the 53-man roster for up to three weeks after reporting. (AP Photo/Phelan M. Ebenhack, File)

ASHBURN, Va. (AP) — Standout left tackle Trent Williams is back at the Washington Redskins' practice facility, but there's no certainty that he'll play at all this season.

Williams didn't practice Wednesday, less than 24 hours after reporting following a lengthy holdout. Interim coach Bill Callahan said the 31-year-old failed his physical and couldn't practice because of discomfort with his helmet.

"All I know is the helmet wasn't comfortable, little discomfort in there," Callahan said.

Williams previously had a growth on his head removed, and the dispute that led to his holdout centered on Washington's medical staff and its handling of that situation. The Redskins announced they got a roster exemption for the seven-time Pro Bowl selection, who was not in the locker room when it was open to reporters.

Callahan, who was offensive line coach before taking over for the fired Jay Gruden, said he spoke with Williams for an hour and added he took part in morning meetings.

"For me, I'm just happy to see him around here and back with the team," right tackle and friend Morgan Moses said. "Whatever he has to do upstairs, that's what he has to deal with, and knowing him he'll get it right."

Callahan was noncommittal about whether Williams would play for Washington this season. Multiple outlets reported this week that Williams had no intention of playing.

"I'm hopeful that he does," Callahan said. "I think his heart is in the right spot. I think Trent loves football. There's nobody that loves football more, that's into it, that studies the game, that really gets into the matchups and is challenged by the matchups. There's no question that he has a love and a passion for playing football."

The Redskins are 1-7 yet did not make any moves before the trade deadline Tuesday. Williams reported shortly after the deadline passed.

"You don't want to see a guy like that leave the franchise," Moses said. "Obviously there's a point they have to come to and make moves. I'm glad he's here."

Rookie quarterback Dwayne Haskins, who could make his first NFL start Sunday at the Buffalo Bills, occupies the locker stall that used to be half of Williams'. Haskins got to meet Williams for the first time but doesn't know if he'll ever have him protecting his blind side.

"Trent, yeah, pretty cool dude," Haskins said. "I'm actually taller than him. Whether he admits or not, that's pretty cool. But it was nice to meet him for the first time. I hope I get to talk to him."

NOTES: No. 1 QB Case Keenum was limited in practice and is still in the concussion protocol. Callahan has said Keenum will start if he's cleared. ... RB Adrian Peterson (ankle) did not practice but is expected to play at Buffalo.