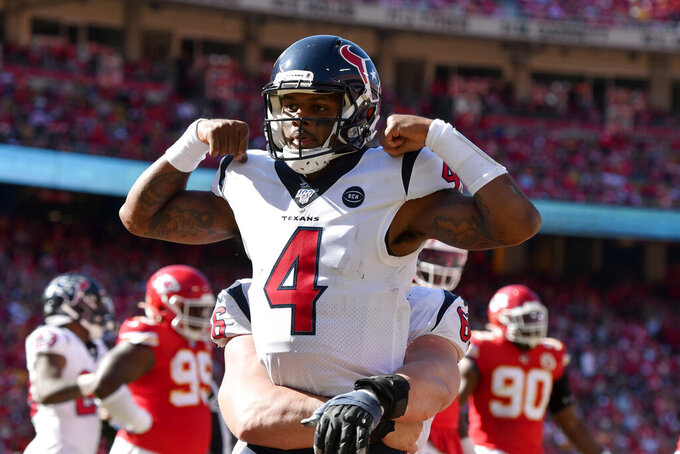 His coaching staff understands it. His players respect it. And opponents know they must be prepared to confront it.

Sometimes, the fourth-down gambles pay off — as they did earlier this season at Tennessee and Kansas City. Sometimes, they backfire. Either way, though, Reich acknowledges he's willing to take the same risky call against Houston on Sunday as he did in last year's home overtime loss to the Texans.

"Those decisions always come down to what's best for the team in the moment," Reich said. "A lot of things go into those decisions, but primarily like you said, it's a belief in the players. Yes, we think situationally it calls for it, but it really stems from a belief that we'll get it done."

Nobody has been better playing the odds this season than Reich.

Indy has converted all seven fourth-down attempts, the gutsiest call coming from its 35-yard line with less than 2½ minutes to go in a two-point game at Tennessee.

And when things don't go right, such as the incompletion on fourth-and-4 from the Indy 43 with 24 seconds left in overtime against Houston, Reich still seems to hit the jackpot. While the Colts lost that game, he won over the locker room with a season-changing moment.

Indy has won 13 of its 19 games since then including twice at Houston late last season.

"Frank made the call he felt was best for his team and that's in my opinion what Frank does well," coach Bill O'Brien said after the Texans converted a key fourth down at Kansas City last week. "He's an aggressive coach. You know sometimes you have to do in your mind what's best for your team from your preparation and where you are in the game. Those are things that Frank does very well."

It keeps everyone on their toes — and the bye week may only give Reich more time to contemplate how to play it Sunday.

"I think that mentality is what carries beyond that one play," he said. "I think that's an example of what happened last year. Yeah, that was one play, but it was the belief and conviction in our players I think that carries longer than the one play."

Four-time Pro Bowler T.Y. Hilton has thrived against the Texans over the years.

In 15 games, the Colts receiver has 78 receptions, 1,506 yards and nine touchdowns. Late last season, with an ankle injury, he still managed to haul in 11 catches for 260 yards in the games at Houston.

The Texans know just tough Hilton can be.

"He's fast, great route runner, can come in and out of his breaks, understands how to attack leverage, has great experience," O'Brien said. "He's seen all of the coverages there are, so he knows how to get open. He's got good chemistry with Jacoby and I think he's targeted quite a bit. It's a challenge."

The Colts went from worst in sacks allowed in 2017 to first last season. Now Houston is trying to follow a similar blueprint.

While Jacoby Brissett has gone down just six times, tied for the second fewest in the league, the Texans have made a dramatic turnaround after giving up 18 sacks during the first four weeks.

Neither Brissett nor Houston quarterback Deshaun Watson have been sacked in their past two games.

The Colts, meanwhile, have only allowed one sack in their past five October games.

Running back Carlos Hyde fit exactly what the Texans wanted when they acquired him from Kansas City on Aug. 31 — after losing Lamar Miller to a season-ending knee injury.

Hyde has been the key to the league's No. 5 rushing attack (139.8 yards) and ran for a season-high 116 yards and one touchdown last weekend.

He's 10th in the NFL with 426 yards rushing and has three touchdowns this season.

After Indy won 13 straight home games to open the series, Houston has taken three of past four at Lucas Oil Stadium.

The Colts' lone victory during this current run came in the 2017 season finale, with Brissett closing out the season as the starter. Indy also had a seven-game home winning streak snapped by Oakland on Sept. 29.