Roethlisberger to return in key matchup vs Chargers 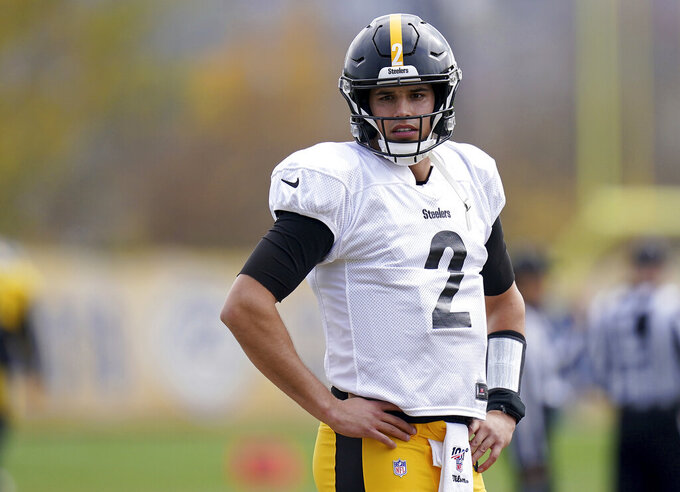 LOS ANGELES (AP) — Coaches preach about preparing for all contingencies. Rarely has it been more accurate than what Pittsburgh's Mike Tomlin and Los Angeles' Brandon Staley are dealing with going into Sunday night's pivotal AFC matchup.

Both entered the weekend with key players on the COVID-19 list.

However, Steelers quarterback Ben Roethlisberger was cleared Saturday to start after passing the NFL's COVID-19 protocols. Pittsburgh will still be without star safety Minkah Fitzpatrick, who is out after being put onto the COVID-19 list Monday. Chargers outside linebacker Joey Bosa was placed on the reserve/COVID-19 list Tuesday as a close contact after Jerry Tillery had a positive test. Bosa was removed from the list on Saturday after testing negative for five straight days.

Roethlisberger's uncertain status during the week forced Los Angeles to prepare for both Roethlisberger and backup Mason Rudolph, though Staley doesn't consider the added prep an issue.

“Every game, you go into the plan saying, ‘OK, if this happens, then this person is in here and this is how the game is going to go.’ It’s part of your weekly routine," he said. “This one just happens to be a little bit different because either one of them could play, where most of the time, when you’re preparing for a backup, it’s only in an emergency.”

Mason Rudolph found out he was starting last week's game against Detroit less than 24 hours before kickoff. He completed 30 of 50 passes for 242 yards with a touchdown and interception in a 16-16 tie. Rudolph spent the week working with the starters but will go back to his reserve role against the Chargers.

Roethlisberger is no stranger to missing practice and then playing. He was forced to work virtually with the team for a week last November before a meeting with Cincinnati after being contact traced. He started against the Bengals and threw for 333 yards and four touchdowns.

Both teams need a win as they try to emerge from a logjam of teams in the muddled AFC, where seven teams have five or six wins as Thanksgiving looms.

The Chargers (5-4) have dropped three of their last four as teams have found ways to contain quarterback Justin Herbert.

The Steelers (5-3-1) have the toughest remaining schedule in the league, but last week's tie means they likely won’t be in any direct tiebreaker situations, which can be both a blessing and a curse. Tomlin insists it’s far too early to start scoreboard watching anyway.

“As long as you’re taking care of your in-stadium business, very rarely do you have to really look around and wonder what’s going on around you,” he said. “Over the course of last month, I and we have probably done very little of that because we’ve been taking care of our business.”

The Steelers traded veteran outside linebacker Melvin Ingram to Kansas City earlier this month, gambling they had enough depth without Ingram to survive.

That depth is about to be tested with Watt dealing with hip and leg injuries suffered when he sacked Detroit’s Jared Goff last week.

The team ruled Watt out on Friday, leaving the Steelers with three true outside linebackers in Alex Highsmith, Taco Charlton and Derrek Tuszka. Watt has 62 career sacks. Highsmith, Charlton and Tuszka have 14 1/2 combined.

“Whether they’re ready or not, they’re gonna have to (be ready),” defensive coordinator Keith Butler said. “We can’t wait on them. They’ve got to come out and they’ve got to know what we ask them to do. They’re getting better in terms of that. ... They’ve gotten a lot more reps this past week, so hopefully we’ll be OK with those guys. They understand what we’re trying to get done.”

The Chargers remain last in the league in run defense, but their numbers have improved over the past month. They are allowing 4.1 yards per carry in the past four games compared to 5.6 the first five weeks. Los Angeles has also allowed only one run over 20 yards after they surrendered seven through five games.

The defense though faces another tough back in Najee Harris. The Steelers rookie is sixth in the league in rushing and will be the sixth running back ranked in the top 10 the Chargers will face this season.

“He’s a really complete back. He’s smooth, he can see, he can run with power, he can catch the football out of the backfield," Staley said of Harris. "He has a physical presence, so he’s willing in pass protection."

Fitzpatrick has missed one snap all season, and Tomlin didn’t exactly sprint to name a replacement. Tre Norwood is underneath Fitzpatrick on the depth chart and Miles Killebrew could also get some run. Norwood has impressed at times this season, though Fitzpatrick’s absence will be particularly weird for strong safety Terrell Edmunds.

Edmunds, who is in a contract year after the Steelers declined to pick up his fifth-year option, has been steady if not spectacular. Now he’ll have to be the last line of defense with someone else besides Fitzpatrick against a Los Angeles offense that — when it’s cooking — is among the best in the league.

“Whoever is out there, (we try to) make them feel as comfortable as we can,” Edmunds said. ”(But) not having your partner in crime out there is always tough.”

Chargers wide receiver Mike Williams, who has cooled after a great start to the season.

Williams led the league with six TD catches after five games and tied for third in the AFC with 31 receptions. But teams have contained him since he had a career-best game with eight receptions and 165 yards against Cleveland on Oct. 10.

Over the past four games, Williams has only 10 catches for 137 yards as opposing defenses have done a better job of taking away Los Angeles' short and deep passing game.

“Mike’s obviously a production guy," Chargers wide receiver Keenan Allen said. "When he gets the ball, he produces at a high level to me and scores a lot. Obviously, we haven’t been scoring. It’s probably got to do with Mike not getting the ball.”