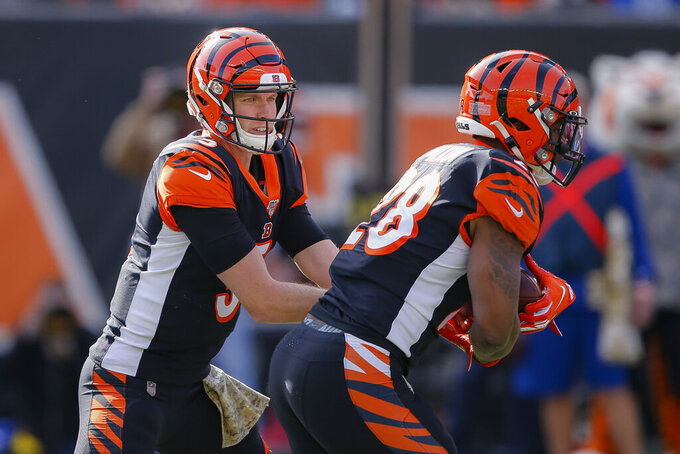 Cincinnati Bengals quarterback Ryan Finley, left, hands off the ball to running back Joe Mixon (28) during the first half of NFL football game against the Baltimore Ravens, Sunday, Nov. 10, 2019, in Cincinnati. (AP Photo/Gary Landers)

CINCINNATI (AP) — These Bengals are on the verge of joining the ranks of the franchise's worst teams — and that's saying something.

As bad as the Dave Shula teams. As bad as Marvin Lewis' worst team. In the same neighborhood as Dick LeBeau's 2-14 team of 2002.

One more loss, and they qualify for the list.

A 49-13 drubbing by the Ravens left Cincinnati the only winless team in the NFL. At 0-9, the Bengals are one loss away from matching the worst start and the longest losing streak in franchise history during a single season. They can tie it Sunday at Oakland.

Already, the season is about looking to next year — will they stay in line for the No. 1 overall draft pick? — while trying to navigate depths seldom experienced in Bengals history.

"You just try to come to work every day with a positive attitude and encourage your teammates, keep their spirits up," tight end Tyler Eifert said Monday.

Cincinnati is one game ahead of 1-8 Washington and two ahead of Miami, Atlanta and the New York Jets for the top pick. Barring a late surge, they'll have a shot at one of the top quarterbacks in the first round.

The Jets visit in December, and the second-to-last game is in Miami, so there's a chance to relinquish the distinction of worst record. The question is whether this team will be up to it.

The current losing streak predates first-year coach Zac Taylor. The Bengals dropped seven of their last eight under Lewis last year, so they've dropped 16 of their past 17 games overall.

"What we do know is this is the toughest stretch we're going to go through in our next 20 years here — this is going to be the toughest one," Taylor said Monday. "And so we find out about the character of the people in this building and what the approach is going to be so that we can look back on this and say it made us stronger."

The running game finally did something. The Bengals protected rookie quarterback Ryan Finley in his debut by running the ball more than they had all season, even after they fell behind early. Joe Mixon carried a career-high 30 times for a season-high 114 yards. But it hardly mattered as the Bengals managed only 13 points . They've scored 20 points only twice this season.

The linebackers have struggled all season and had another bad game. The two safeties were the leading tacklers. Taylor singled out that group in reviewing the defense Monday.

"Somebody's got to step up and be consistent in that room, and we're still waiting on that," Taylor said.

Mixon. Running hard in an out-of-hand game, he showed what he can do when given some room. The Bengals used more toss plays to get him on the perimeter with some space to run.

The defense . Could it go any lower? Lamar Jackson completed a 49-yard pass on the opening play, and the Ravens put together three straight 75-yard touchdown drives to open the game, doing whatever they wanted.

The uncertainty around receiver A.J. Green moves into another week. Green had ankle surgery during camp and had hoped to return for the Ravens game, which came after a bye week, but he backed off after a practice last week. Taylor said Green is day to day.

3 — The number of times the Bengals have had the first overall pick in the draft. They took defensive tackle Dan Wilkinson in 1994, running back Ki-Jana Carter in 1995 and quarterback Carson Palmer in 2003.

Watch the jockeying for the top overall pick play out.