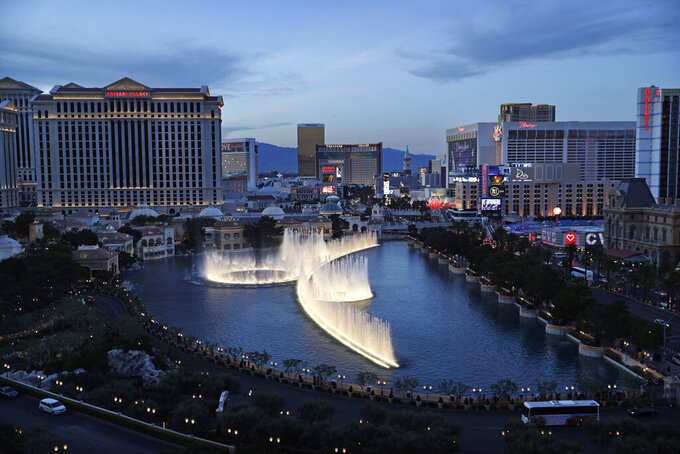 FILE - In this April 4, 2017, file photo, the fountains of Bellagio erupt along the Las Vegas Strip in Las Vegas. The NFL on Tuesday, Jan. 21, 2020, detailed its draft plans for April 23-25 on the city's glittering Strip. The league knows it has a long ways to go to match the previous road shows, particularly in Philadelphia and Nashville. It believes it has found the right place in the Nevada desert. (AP Photo/John Locher, File)

The NFL on Tuesday detailed its draft plans for April 23-25 on the city's glittering Strip. The league knows it has a long ways to go to match the previous road shows, particularly in Philadelphia and Nashville. It believes it has found the right place in the Nevada desert.

“The success of the planning and execution of draft relies heavily on the support and enthusiasm of the local leadership and communities,” says Peter O'Reilly, the NFL's executive vice president of club business and league events. “Fortunately, we have had exceptional partners along the way to help us grow the draft to what it is today. Las Vegas is no different. This is a city that understands the importance of attracting and delivering large-scale events and has a talented team in place to help support those efforts.”

Those efforts will center around Caesars Palace and the Bellagio hotels. The main stage for the draft will be constructed beginning April 3 next to Caesars Forum. It will include a viewing zone to watch the first-round selections on Thursday night, the second and third rounds on Friday night, and the remaining four rounds on Saturday.

That stage also will host daily performances by a variety of entertainers throughout the three days.

Teams will make their selections at the Caesars Forum conference center in what the league and city are dubbing Selection Square.

Adjacent to the main stage will be the NFL Draft Experience where fans can participate in interactive games, view the Vince Lombardi Trophy, attend autograph sessions with NFL players and former players. There also will be a stage at the Experience for performances by local talent, all available without charge.

A red carpet area will be constructed beginning April 8 at the fountains of Bellagio, one of the city's more famous attractions.

Portions of the Strip will be closed to vehicular traffic during the three days of the draft. That's a big deal in Las Vegas usually reserved for New Year’s Eve and for the city's marathon. The Strip will turn into a giant gathering area outside Bellagio and Caesars.

The league notes that it is working closely with local government agencies as well as the resort properties, businesses and their employees to build the draft locations with the least amount of impact to traffic as possible. The NFL is working with Las Vegas officials to identify additional parking and transportation options for both locals and visitors attending the draft.

For decades, the NFL had a virtually nonexistent relationship with Las Vegas. But then the Raiders announced they were moving there from Oakland, and sports betting became legalized in much of the country.

Voila, Vegas was on the league's map. Don't bet against it hosting a Super Bowl in this decade.

One of the newest attractions will be the Raiders' stadium, located just off the Strip.

“The driving factor for the league selecting Las Vegas to host the 2020 draft is the Raiders (and the NFL) entering the market and the Raiders playing their first game there just months later,” O'Reilly says. “The draft is an incredible way to help make a splash in the Raiders’ new home, and while we won’t host the draft itself at the Stadium, we’re working closely with the Raiders to highlight Allegiant Stadium both locally and nationally during each day of the draft.”

The NFL began moving the draft around in 2015, going to Chicago for two years, then Philly, then Dallas and Nashville. Most of the league's cities, particularly those that won't likely host a Super Bowl, have shown interest in having it. Next year, Cleveland gets the assignment, and Kansas City has it in 2023. The 2022 “selection meeting” is still up for grabs.

“Each new draft city offers a unique landscape to produce an exciting and unforgettable draft,” O'Reilly notes. “We focus on embracing the city’s personality and iconic locations to intertwine the event and broadcasts with the host city to make it feel local and connected. Whether it is Nashville’s Lower Broadway, the Rocky Steps in Philadelphia or Chicago’s Grant Park, each has afforded us the ability to celebrate these cities and create an event that captures the spirit and energy of our hosts.”

Of course, only fans who think their teams did well in the draft will likely be singing “Viva Las Vegas.”