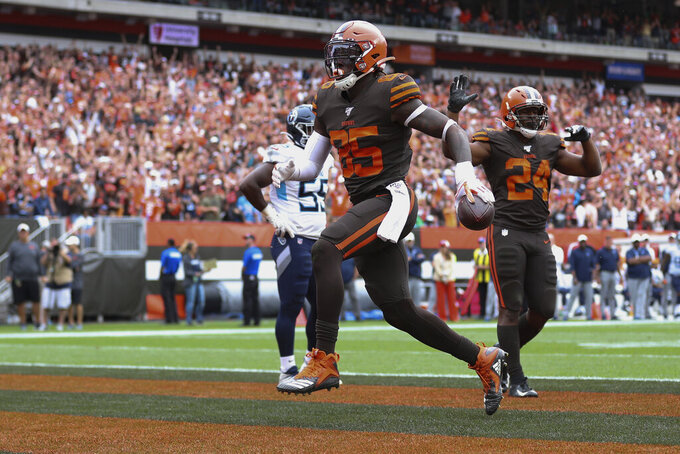 Cleveland Browns tight end David Njoku (85) catches a pass and scores a touchdown during an NFL game against the Tennessee Titans, Sunday, Sept. 8, 2019, in Cleveland. (Margaret Bowles via AP) 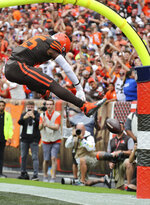 Along with a concussion, Njoku broke his right wrist while trying to brace himself in a scary fall and could need surgery, a person familiar with the situation told The Associated Press on Wednesday. The person spoke on condition of anonymity because the team has not provided details of Njoku's injury.

Njoku will visit a specialist before an operation is scheduled, the person said.

During the first quarter of Cleveland's 23-3 win over New York on Monday night, Njoku jumped to catch quarterback Baker Mayfield's high throw and was undercut by cornerback Nate Hairston. Njoku put his arm down in an attempt to support his fall before crashing awkwardly on his neck and head.

The 23-year-old Njoku didn't practice Wednesday and his wrist injury was not known until the Browns released their report, which included starting right tackle Chris Hubbard (foot), linebacker Christian Kirksey (chest) and safety Damarious Randall. None of them practiced as the Browns prepared to host the Los Angeles Rams on Sunday night.

If Njoku is out for any significant time, the Browns will need to sign another tight end. A first-round pick in 2017, Njoku had 56 catches and four touchdowns last season and he's being counted on to produce more in 2019.

Njoku had four catches for 37 yards in Cleveland's opener.