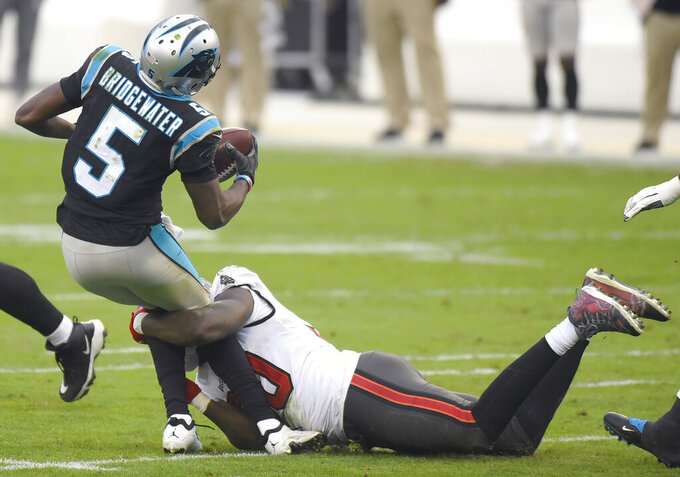 CHARLOTTE, N.C. (AP) — The reeling Carolina Panthers desperately needed some good news coming off their fifth straight loss, and it appears they got some on Monday.

Coach Matt Rhule said on a video conference call that medical tests revealed that Teddy Bridgewater “does not have a serious knee injury” and he added that he's hopeful the quarterback will return to practice Wednesday and play on Sunday against the Detroit Lions.

That’s great news for the Panthers considering Bridgewater’s backups have just two career starts between them.

Rhule was less forthcoming on the status of 2019 All-Pro running back Christian McCaffrey, who is still recovering from a shoulder injury. Rhule is still hopeful McCaffrey will play Sunday but sounded less optimistic about his status, calling him “week to week."

Neither Bridgewater nor McCaffrey was made available to speak to reporters Monday.

The Panthers (3-7) can certainly use all hands on deck as they look to rebound from a 46-23 thrashing by the Tampa Bay Buccaneers on Sunday. The Panthers were outgained 544-177 and the Bucs racked up 30 first downs.

It was a loss that Rhule called “completely unacceptable.”

What was a already bad day looked to get worse when Bridgewater injured his right knee in the fourth quarter and had to be replaced by P.J. Walker. Bridgewater, who has started all 10 games this season, did not return.

He had started off hot Sunday completing his first 13 passes, including two touchdown passes, before the wheels began to fall off. Carolina managed just 35 yards in the second half and was outscored 29-6 after intermission.

The Panthers clearly missed McCaffrey, who has scored two touchdowns in each of the three games he has played. He sat out against the Bucs with a sprained AC joint in his shoulder after missing six games earlier this season with a high ankle sprain.

While Carolina's offensive line has not been a strength this season, right tackle Taylor Moton has been the one exception. He has played extremely well, which is a good for the fourth-year pro considering he's in a contract year and will become an unrestricted free agent. Expect Moton, who earned $1 million this season, to cash in if he hits the free agent market.

Carolina's third-down defense has been brutal this year, as opponents are converting an NFL-worst 55.2% of their opportunities into first downs. On Sunday, the Buccaneers converted 10 of 16 third down chances. While Tom Brady converted a third-and-19, third-and-11 and third-and-7, most of Tampa Bay's chain-moving drives simply meant picking up a yard or two, which means Carolina's defense isn't winning on first and second down, either.

The Panthers are getting good production from punter Joe Charlton, who averaged 54.3 yards per punt against the Bucs with two of his four punts being downed inside the Tampa Bay 10. But it's never good when your punter is one of your better players.

Carolina has started fast in games this season. But continuing that momentum after the first 15 minutes has been an issue. The third quarter, in particular, has been a major problem.

On Sunday, Bridgewater was a perfect 10 for 10 on pass attempts in the first quarter, piling up 93 passing yards and two touchdowns. During the final three quarters, he was a combined 8 of 14 for 39 yards with one interception.

Cornerback Donte Jackson continues to give the Panthers everything he can, playing through a painful toe injury. But it's rare now when Jackson can get through an entire game due to the lingering injury. Rhule said Monday he will consider all options moving forward with the ailing Jackson, including sitting him down to allow the injury a chance to heal. Jackson left Sunday's loss to the Buccaneers in the second half after his toe began to act up.

Running back Mike Davis injured his hand against Tampa Bay, but managed to return and finished the game.

544 — Total number of yards surrendered by the Panthers on Sunday to the Buccaneers, the third-most allowed in the franchise's 26-year history.

The Panthers' coaching staff will have to focus on making sure this season doesn't slip away after a lopsided defeat to the Buccaneers on Sunday. That means getting players to buy in to the process and not try to do too much on their own, which can lead to players being out of position. For the Panthers, it comes down to winning the third quarter on offense and third downs on defense.