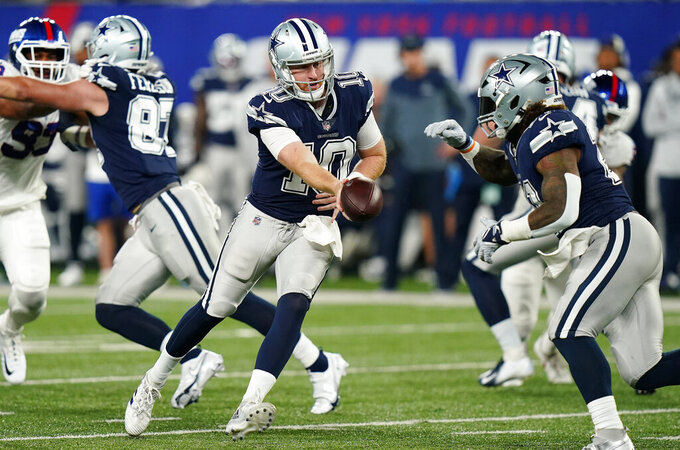 EAST RUTHERFORD, N.J. (AP) — CeeDee Lamb was angry with himself in the second quarter after dropping a wide-open pass and costing the Dallas Cowboys a possible touchdown. It was just embarrassing.

The star receiver more than made up for it with the game on the line, making a one-handed TD catch with 8:30 to play to cap a go-ahead drive that gave the Cowboys a 23-16 win over the New York Giants on Monday night.

“He’s CeeDee Lamb,” Dallas quarterback Cooper Rush said after hitting Lamb four times on the 89-yard drive. “Guy’s open a lot. Makes big-time catches. That fade catch was unbelievable. I’m sure he wants that other one back, but made tons of plays for us, like usual.”

Ezekiel Elliott scored on a 1-yard run to ignite a comeback from a seven-point deficit and Brett Maher kicked three field goals as the Cowboys (2-1) beat the Giants (2-1) for the 10th time in 11 games and handed coach Brian Daboll his first loss.

“Didn’t get it quite done tonight,” Daboll said. “They made more plays than we did. Give them credit.”

Rush threw for 210 yards, including the 1-yard touchdown to Lamb, in winning his second straight game filling in for injured Dak Prescott (thumb).

Lamb finished with eight catches for 87 yards, but also dropped a potential 52-yard TD pass. He paced the sideline after the play and teammates walked over to encourage him.

“It was situation I had to deal with on my own. Obviously I’m the one that dropped the ball for the guys,” Lamb said. “So knowing that I had to make this up in the back end of the game, I just wanted to step up.”

Lamb actually made three plays at the end of the drive. He caught a 4-yard pass on fourth-and-4 from the Giants 41 with 10:27 to go. He added a 26-yard grab to the 1 and followed that with his great catch on the fade pattern for a 20-13 lead.

Saquon Barkley scored on a weaving 36-yard touchdown run that gave the Giants a brief 13-6 lead. Graham Gano added three field goal, including a 51-yarder with 3:37 to play to make it a one-score game.

The Giants got the ball back with 1:45 left, but the series ended quickly with an interception by Trevon Diggs.

The Cowboys outgained the Giants 391-336 in an NFC East rivalry game that saw the teams rush for almost as much as they gained passing. Dallas ran for 176 yards — Tony Pollard had 105 — and the Cowboys threw for 215. The Giants gained 167 on the ground and 196 in the air.

Dallas came into the game having allowed only one touchdown in each of its first two games, and the trend continued Monday night. The defense hounded Daniel Jones, sacking him five times, with DeMarcus Lawrence tying his career high with three.

Maher sandwiched field goals of 26 and 28 yards around a 42-yarder by Gano to give Dallas a 6-3 halftime lead.

Cowboys: Lawrence was injured early in the third quarter when he hurt a foot on a play that saw Jones get sacked by safety Donovan Wilson. ... Giants wide receiver Sterling Shepard appeared to hurt his leg on New York's final offensive play, and Daboll said after the game the initial report was not good.

Cowboys: Return home to face the Washington Commanders on Sunday.

Giants: Complete a three-game homestand against the Chicago Bears on Sunday.