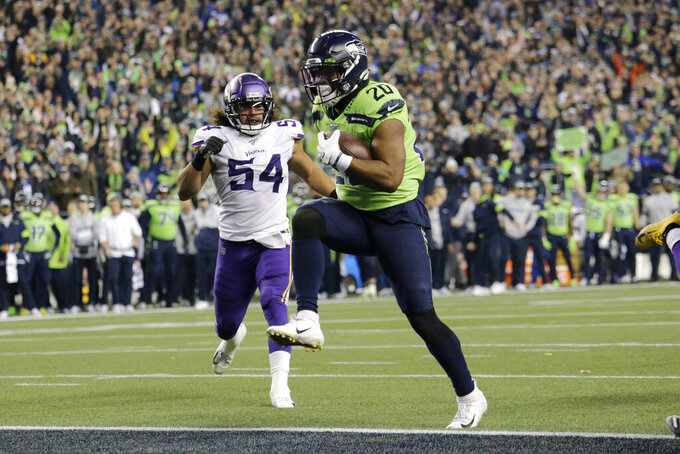 RENTON, Wash. (AP) — It only took a couple of weeks of seeing what the combo of Chris Carson and Rashaad Penny could produce for the optimism over the Seattle Seahawks' postseason chances to rise.

And in one play last week against the Los Angeles Rams, that one-two punch was gone.

Penny went down with an ACL injury on his first offensive touch of the game, an injury that will require surgery and ended his season. While the Seahawks believe they have the options in place to replace Penny’s production, there will be a change going forward from a game-plan that seemed to be working well for Seattle.

“He has had a big impact the last few weeks and we’ve really liked his contribution,” coach Pete Carroll said. “You miss him. A guy like that, you just don’t replace him. You go to the next guy and he brings what he has.”

The loss of Penny will likely mean two significant changes. First, the balance of carries should shift back to Carson. Through the first 10 games, Carson was averaging 20 carries per contest. But in the two games coming out of Seattle’s bye week where Penny became a much more significant part of the rushing offense, Carson’s carries dropped to an average of 15 per game. There was a conscious effort by Seattle to get the ball to Penny and give Carson a bit of a break heading toward the postseason.

The other major change comes with filling Penny’s role. The first chance will go to C.J. Prosise.

“It’s not my first time in this position. The time is called, got to go perform, got to go do your job. I’m just ready for the opportunity,” Prosise said.

Prosise is somewhat of an enigma for Seattle. He’s shown flashes of being a premier running back during his limited opportunities in his four seasons. But getting those chances has been the biggest challenge for Prosise.

Whether its injuries or simply getting shuffled down the depth chart, Prosise has been invisible for more than half of his career. Prosise has played in just 23 of a possible 61 regular season games. He’d been inactive for the previous five games before last week against the Rams.

“It was tough kind of coming in and out and not really having much expectation of playing,” Prosise said. “It was frustrating. It was a hard time for me. But I knew it was some adversity I had to get through.”

For many Seattle fans, the memory of Prosise’s two-week span against New England and Philadelphia during his rookie season of 2016 still stands out. Against the Patriots, Prosise had 17 carries for 66 yards, and seven receptions for 87 yards. For the former wide receiver turned running back, it was the perfect combination of running and receiving. A week later against the Eagles, Prosise had four carries for 76 yards, including a 72-yard touchdown run, but suffered a fractured scapula early in the game.

In those two games, Prosise had a combined 21 carries for 142 yards. In the subsequent 17 games over the past three seasons where Prosise has played, he has rushed for a grand total of 63 yards.

“I feel more fresh than ever,” Prosise said. “I’ve been working on my game, working on myself mentally, physically. I’ve stayed in playbook, stayed ready. I knew my time would be called at some point. I was just waiting for it.”

Seattle also expects to work rookie Travis Homer into the mix. But those will be limited opportunities with Carson and Prosise the primary options going forward.

“We expect them to do well. C.J. has always done well when you give him a chance. Now, he’ll know he’s in the game plan and all of that. I’m hoping he’ll contribute in a big way,” Carroll said.