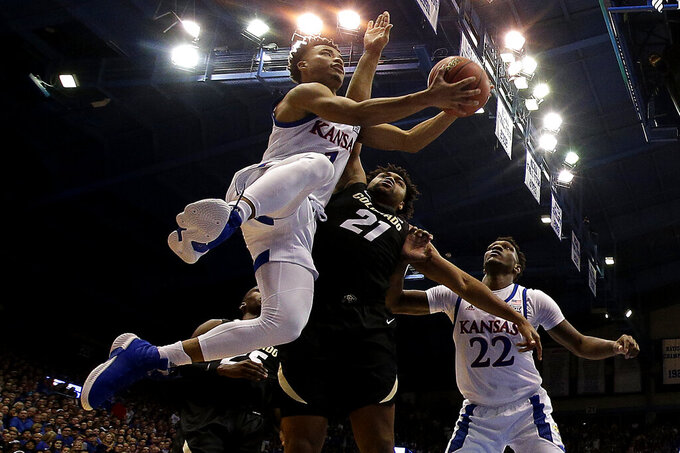 With Bey and D'Shawn Schwartz quieted, Evan Battey lead the way for the Buffaloes, scoring 14 points on a 5-for-8 shooting.

COLLEGE PARK, Md. (AP) — Anthony Cowan Jr. made a free throw with 2.1 seconds left and Maryland erased a 15-point deficit in the second half to rally past Illinois in the Big Ten opener for both teams.

The Terrapins (10-0, 1-0 Big Ten) didn't lead after halftime until Cowan's free throw but still matched their best start since winning 10 straight to open the 1998-99 season.

Cowan collected a steal in the closing seconds of a tie game and was fouled in a scrum by guard Andres Feliz. Cowan made the first free throw and missed the second. Illinois (6-3, 0-1) failed to get a shot off in the remaining time.

Cowan had 20 points, seven rebounds and six assists, and Jalen Smith (14 points, 13 rebounds) recorded his sixth double-double of the season for Maryland.

COLUMBUS, Ohio (AP) — Kaleb Wesson scored 28 points and had 10 rebounds for his ninth career double-double, and Ohio State scored 100 points against a Big Ten rival for the first time since 1991.

Four players hit double figures for the Buckeyes (9-0, 1-0 Big Ten), who shot 57.4 percent from the field. Andre Wesson scored 15, and sophomores Duane Washington Jr. and Luther Muhammad each had 14.

Izaiah Brockington scored 19 points and Seth Lundy added 10 for the Nittany Lions (7-2, 0-1), who lost for the second time in four games and gave up 100 points for the first time since 2017. Penn State managed just 25 rebounds, far below its average of 44.

The Wildcats became the fastest school to reach 600 wins in an arena in NCAA history. Kentucky achieved the milestone at the 43-year-old building named after coach Adolph Rupp in 670 games, surpassing the pace of UCLA (689 games at Pauley Pavilion) and Kansas (699 at Allen Fieldhouse).

Admission was free at Baylor's campus arena because the Bears were playing Oklahoma in the Big 12 football championship game, which started about the same time 100 miles north of Waco at the home of the Dallas Cowboys.

It was supposed to be the first true road game for the Wildcats (9-1), but their fans might have outnumbered the Baylor (7-1) contingent. They loudly chanted “U of A” before the Baylor introductions but had a hard time getting into the game early, with Arizona giving up a 15-0 run and shooting 33 percent in the first half.

Eddie Stansberry led Hawaii (6-3) with 24 points, including a career-high seven 3-pointers. The loss snapped a three-game winning streak for the Rainbow Warriors.

BIRMINGHAM, Ala. (AP) — Precious Achiuwa scored eight of his 14 points in the final 4 minutes to rally Memphis.

Justin Moore added 14 points and Jermaine Samuels had 12 for Villanova. The Wildcats have won 28 of 29 against Big 5 opponents since 2012.

Jordan Tucker added 13 points off the bench for the Bulldogs (9-0). Kamar Baldwin, who was averaging a team-high 17.5 points for Butler, scored 12 points.

Justin Bean added 14 points and Neemias Queta chipped in six in 10 minutes in his first action of the season for Utah State (9-1, 2-0 Mountain West).