Raiders' Davante Adams ready to move on, focused on Texans 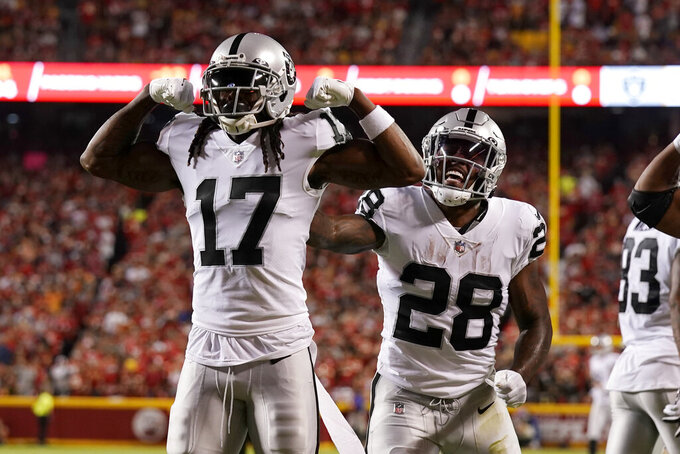 He used about four of them and had nothing more than Sunday's opponent, the Houston Texans, on his mind.

Speaking to reporters for the first time since being charged with assault for a shoving incident with a freelance photographer immediately following a loss in Kansas City on Oct. 10, Adams was asked if he had anything to add to the previous statements he made after the game and on social media.

“No, not at this point,” Adams said. “I mean, I said what I said, and it was genuine. It was honest before, so like I said, it was something that I regretted, but we’re putting it to bed now. There’s nothing else to really talk about at this point.”

Refreshed from a bye week that saw his college jersey retired at Fresno State on Saturday, one night before serving as the pace car driver for the South Point 400 at Las Vegas Motor Speedway, Adams answered four more questions about self-reflection, being honest with himself and on-field performances.

“You got to be real with yourself at the end of the day,” Adams said. “And if that was your best effort and the best that you can possibly do, then sometimes you got to live with it and come back and fight another day.”

Sage advice that could be applied to the Raiders’ prize acquisition either on or off the field, considering his past 10 days.

From the moment Ryan Zebley walked into Adams’ path as he was heading into a tunnel after the 30-29 loss, it’s been a whirlwind of events. Adams shoved Zebley to the ground before continuing to the locker room. Moments later, Adams apologized during a postgame interview in the locker room, then took to social media to apologize again.

Zebley said he suffered whiplash, a headache and a possible minor concussion, per police records of the incident, and two days later Adams was charged with misdemeanor assault in the Municipal Court of Kansas City for committing an “intentional, overt act” that inflicted bodily injury.

Adams is due in court on Nov. 10. And with the NFL disciplinary process needing to play out before the league acts on the incident under its personal conduct policy — possible punishment includes a fine or suspension —Adams is expected to be available for the Raiders on Sunday.

At 1-4, Las Vegas can use all the help it can get against a Texans team also coming off a bye week, and its first victory of the season the week prior.

“Obviously, you look at the record and none of us are proud of that part,” Adams said. “But when you look at what we put into it, not that there’s any moral victories in this, but you even look at some of the power rankings and the fact that they have us where they have us, after having one victory at this point shows that there’s something that we’re doing out there that people are taking notice of and just not finishing to the best of our ability.

“Right now it’s just checking that and finding all the things that we got to correct and do a little bit better to be able to finish off those games the right way.”