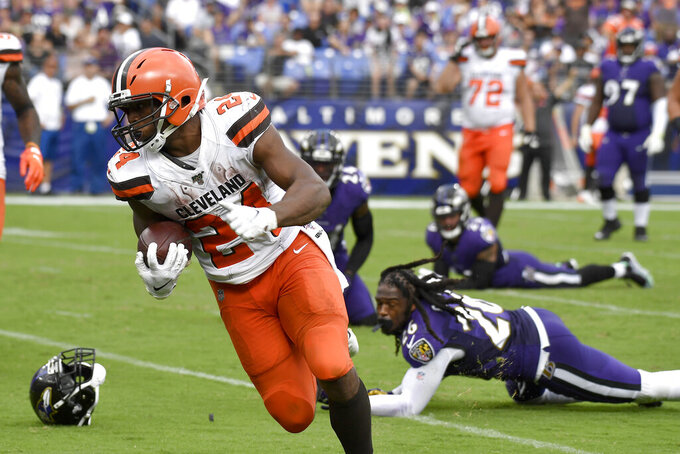 Cleveland Browns running back Nick Chubb (24) prepares to cross the goal line after avoiding several tackles from Baltimore Ravens defenders during the second half of an NFL football game Sunday, Sept. 29, 2019, in Baltimore. (AP Photo/Brien Aho)

OWINGS MILLS, Md. (AP) — For well over two decades, defense has been a key component of the Baltimore Ravens' success.

Four weeks into the 2019 season, it's a glaring weakness.

Baltimore has allowed more than 500 yards in each of the past two games and has been burned for several big plays. The unit's shortcoming was clearly evident in Sunday's 40-25 loss to the Cleveland Browns, who capitalized on an 88-yard touchdown run by Nick Chubb and completions of 65 and 59 yards by Baker Mayfield.

The problem, coach John Harbaugh said Monday, isn't that the players aren't doing enough. It's that they're doing too much for their own good. The result has been an uncharacteristic performance by a defense that was ranked No. 1 last year and has allowed fewer touchdowns over the past dozen years than any team in the NFL.

"We're overplaying some of our zone coverages, overplaying some routes," Harbaugh said. "We're chasing some patterns that really fall into the category of trying to do too much. That's not what we need to do. You just need to do your job, be in your right spot and play football."

Harbaugh's seeing things that quite simply are not associated with Ravens football.

The idea is to get it done now, before Sunday's game on the road against a longtime rival.

"I guarantee you Pittsburgh is going to be throwing those same types of routes," Harbaugh said. "We got to play them better."

The Ravens have amassed 823 yards rushing, most ever by the team after four games. Against the Browns, Mark Ingram has 71 yards, quarterback Lamar Jackson added 66 and the Ravens averaged 6.7 yards per carry.

"The run game was tremendous," Harbaugh said. "I thought we blocked them very, very well. Drives got stopped by us either having miscues — we stepped out of bounds, dropped a pass, whatever — or we had the turnovers in the second half. But it wasn't by them stopping the run."

On almost any other team, a defense playing like this would be cause for panic.

"You have to remain calm," cornerback Brandon Carr said. "You have to figure out ways to get the job done under duress, and this is one of those times right now. It's frustrating on us right now. We know that. But the good thing is we have an opportunity to clean this game up and get ready for another week."

WR Miles Boykin. The third-round draft pick out of Notre Dame had three catches for 32 yards and a touchdown. While the Browns focused on covering wide receiver Marquise Brown and tight end Mark Andrews, Boykin was targeted three times and caught the pass on each occasion. His second NFL touchdown, a 9-yarder from Jackson, tied the game at 7.

WR Chris Moore. Wide open at the sideline in the second quarter, Moore had a foot out of bounds when he caught the ball on a lengthy third-down play. "That's just what we're talking about," Harbaugh lamented. "You make those plays when they're presented to you, and it's a whole different situation."

The Ravens aren't sure when DT Brandon Williams will be ready after missing Sunday's game with a knee injury. "It's not a long-term injury, for sure," Harbaugh said. "It's not going to be a surgery or anything like that."

248. That's how many passes Jackson threw without being picked off from Nov. 25, 2018, through the fourth quarter Sunday. Jackson was intercepted on successive series trying to work a comeback from a 33-18 deficit.

The Ravens signed free agent linebacker L.J. Fort, who was cut by the Eagles on Friday. He will play special teams and middle linebacker, Harbaugh said.

Forget the fact that Pittsburgh was winless heading into Monday night's game against Cincinnati. This game is big, with Baltimore now tied for first in the AFC North with Cleveland.

"We can control our own destiny and it starts in Pittsburgh, which is always a big challenge," Harbaugh said. "They're a very good team obviously, a big rival."