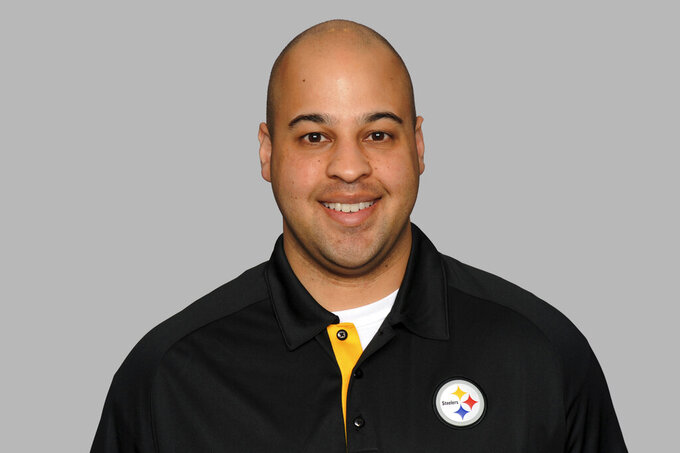 FILE - This is a 2012 photo of Omar Khan of the Pittsburgh Steelers NFL football team. The Steelers stayed in-house to find Kevin Colbert's replacement, promoting longtime executive Omar Khan to be the team's next general manager on Wednesday, May 25, 2022. (AP Photo/File)

Khan signed a four-year deal to succeed Colbert, who is retiring at the end of the month following a hugely successful run that included two Super Bowl victories and an appearance in a third.

The 45-year-old Khan has spent more than two decades with the Steelers, joining the club in 2001 as a football operations coordinator. He's served in several different capacities for the team throughout his tenure, most recently as vice president of football and business administration, which required him to be heavily involved in helping the club navigate its always tenuous salary cap situation.

"Omar has been an integral part of our Football Operations Department during his 21 years with the team and that experience will serve him well in his new position,” Steelers president Art Rooney II said in a statement.

Khan takes over a club in transition following quarterback Ben Roethlisberger's retirement in January and the wildly popular Colbert's decision to step away, although he has hinted at staying on in some unofficial capacity with the club.

One of Colbert's final moves was to select quarterback Kenny Pickett with the 20th overall pick in last month's draft. There are other pieces in place, namely reigning NFL Defensive Player of the Year T.J. Watt, who signed a long-term deal last summer.

The Steelers are coming off a 9-7-1 season that ended with a blowout loss to Kansas City in the opening round of the playoffs.

Philadelphia Eagles vice president of player personnel Andy Weidl, who is a native of the Pittsburgh suburbs, also interviewed for the job. Weidl is expected to join Khan's staff in Pittsburgh.

“I am ready for this challenge and grateful to continue the success we have had on the field during my first 21 years,” Khan said in a statement. "I look forward to completing our football operations staff and working tirelessly to build another championship football team for Steelers Nation and our community.”