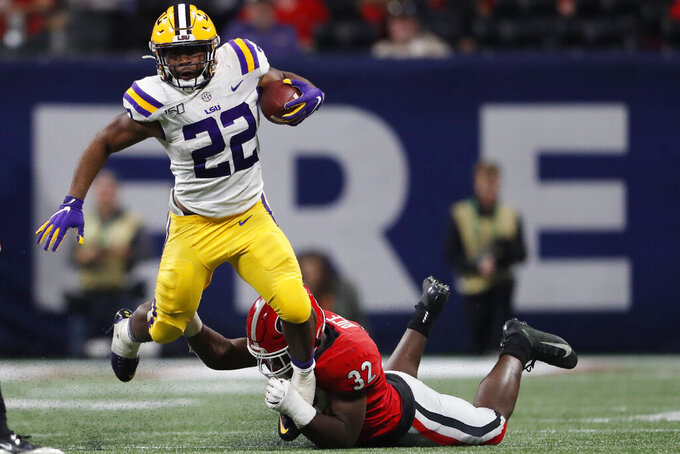 KANSAS CITY, Mo. (AP) — The Kansas City Chiefs used the final selection in the first round of the NFL draft to add another threat to their offense.

As if they didn't have enough already.

After the phones went silent in their attempt to trade out of the first round, the Chiefs used the No. 32 pick Thursday night on LSU standout Clyde Edwards-Helaire. He was the only running back taken in the first round, and he joins an offense led by quarterback Patrick Mahomes, wide receivers Sammy Watkins and Tyreek Hill, and tight end Travis Kelce that helped to deliver the Chiefs their first Super Bowl championship in five decades.

“This guy we view as an extraordinary running back and a rare talent with the things he can do,” Chiefs general manager Brett Veach said. “We had a pocket of guys — some were offensive linemen, some were corners, some were linebackers. The way it worked out and where we picked and what was left, he was the best player and it made sense for us.”

The Chiefs return lead running back Damien Williams and signed former Raiders running back DeAndre Washington in free agency. But given the way the Chiefs churned through running backs last year, losing several to season-ending injuries, it made sense to add a versatile pass-catching threat out of the backfield.

“This guy can consistently make plays when there's really nothing there to be made,” Veach said. “Throwing him in there with Tyreek and Sammy and Travis, I think it could be really exciting.”

Edwards-Helaire also comes to the Chiefs with very little wear and tear on his body.

The 5-foot-7 junior ran just 215 times for 1,414 yards and 16 touchdowns while catching an astounding 55 passes for 453 yards and another score for the national champions last season. Edwards-Helaire showed up when it mattered most, too, running 16 times for 110 yards in LSU's victory over Clemson in the title game.

“I just feel like this is the perfect fit,” Edwards-Helaire said. “Just how versatile the offense is, and you know, they were big on being able to get their running back out in space, and I felt like that's where I absolutely thrived.”

The Chiefs came into the draft in the most enviable of positions: They were able to retain most of their own free agents, including cornerback Bashaud Breeland and wide receiver Demarcus Robinson, ensuring 20 of 22 starters from their title team would be back for a season that could begin after an abbreviated off-season.

The few holes the Chiefs did have were plugged by value signings in free agency.

Veteran offensive lineman Mike Remmers was brought in to replace the departed Cam Erving at swing tackle, and cornerback Antonio Hamilton was signed to replaced Kendall Fuller, who signed a big-money deal with Washington. The Chiefs also brought in Ricky Seals-Jones to back up star tight end Travis Kelce, and they managed to grab DeAndre Washington from the AFC West rival Raiders to provide some depth at running back.

That gave the Chiefs plenty of latitude at No. 32.

It was the first time in three years that Veach was due to pick on the opening night of the draft. His first draft came after the Chiefs sent their first-round pick in 2018 to Buffalo as part of the deal that allow them to move up and select Patrick Mahomes the previous season. Then last year, Veach sent their first-round pick to Seattle in the days before the draft to get pass rusher Frank Clark, who turned in a Pro Bowl season in helping Kansas City to the championship.

Trading out of the first round again remained a distinct possibility, though. The Chiefs had a league-low five picks — one each of the first five rounds — and were keen to pick up a couple more selections later in the draft. But when the Packers traded up to select quarterback Jordan Love, the phones suddenly went silent in Kansas City.

That was just fine with the Chiefs, who had a pocket of players on which they still had first-round grades. They ultimately decided to go with undersized and often-overlooked Edwards-Helaire, choosing him over more high-profile running backs such as Georgia's D'Andre Swift and record-setting Wisconsin standout Jonathan Taylor.

“Our priority going into the draft was really add talent," Veach said, “and you know, certainly every team has philosophies and that's no different for us. But I mean, never lose sight in this process, you're just collecting really good players. There's value placed on certain positions and we do the same thing, but when you have a guy you think is a Pro Bowl running back, that's a high value too. We think this guy can be great.”