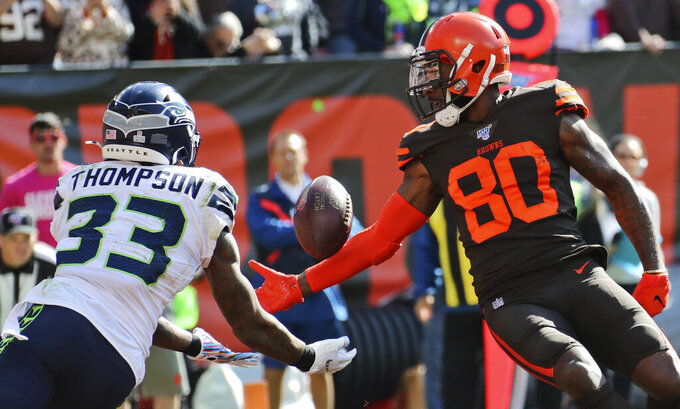 BEREA, Ohio (AP) — Jarvis Landry either delivered bulletin-board material to the Patriots or provided another lesson in the perils of social media.

During an interview with reporters Thursday, Cleveland's wide receiver was asked how he thought the Browns (2-4) would play coming out of their bye week. They visit unbeaten New England on Sunday.

Landry never mentioned the Patriots, but within minutes Twitter timelines were buzzing with comments that he had guaranteed a victory over the defending Super Bowl champions.

Asked to clarify his remarks, Landry said he wasn't predicting a win. He stressed the Browns intend to go to Foxborough, Massachusetts, to win.

That's not what got relayed to the Patriots.

Linebacker Kyle Van Noy was told by media members that Landry had guaranteed the Browns would beat the Patriots.

"Oh, he did?" said Van Noy, who asked if Landry had provided extra motivation to he and his teammates. "Nah, we're focused on us."

The Patriots have won 20 straight games under coach Bill Belichick against quarterbacks in their first or second years. On Monday night, they intercepted New York Jets QB Sam Darnold four times in a 33-0 rout. Browns second-year quarterback Baker Mayfield has thrown a league-high 11 interceptions and will be facing a Patriots defense that has 18.

"I wouldn't say they've faced a first- or second-year quarterback like Baker Mayfield," Landry said. "And that's something that we'll see after the game. And then we'll add to your statistics about first- and second-year quarterbacks. But again, we're going to win the game and I wouldn't say anybody's a genius. I just think that they try to take away your strengths and make other guys make plays.

"And if other guys can't make plays, then it's going to be a long day."