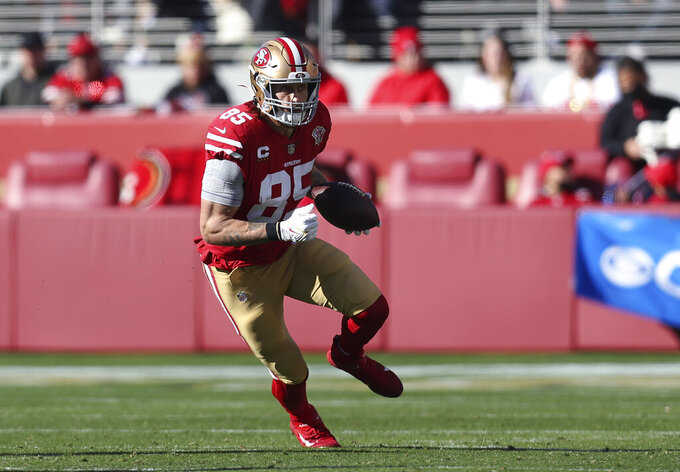 LAST YEAR: The Niners bounced back from an injury-plagued 2020 season to get back into the playoffs and make it all the way to the NFC title game before falling to the eventual champion Rams. San Francisco traded three first-round picks to draft Trey Lance third overall as the future franchise QB but kept the team in veteran Jimmy Garoppolo's hands in 2021. Garoppolo ran an efficient offense taking advantage of do-everything receiver Deebo Samuel but also showed the limitations that led to the move for Lance. A return of a healthy DE Nick Bosa helped revive a defense that had an overpowering pass rush at times but it wasn't enough to get back to the Super Bowl.

CAMP NEEDS: The Niners have serious questions on the offensive line, especially on the interior. Williams was an All-Pro last season and has Lance's blindside protected but there are questions at the other spots. Mike McGlinchey is returning from a quadriceps injury but should be ready at the start of camp at right tackle. The three interior spots are up in the air with last year's second-round pick Aaron Banks having a shot at one of the guard spots and Jake Brendel getting the first chance at center. Daniel Brunskill played right guard last season but might be better as a versatile backup if second-year player Jaylon Moore can earn a starting spot.

KEY CAMP COMPETITIONS: The Niners didn't use a draft pick at safety even after letting longtime starter Jaquiski Tartt leave in free agency. Instead they are hoping the answer to finding the safety to line up with Jimmie Ward is already on the roster. Last year's fifth-round pick Talanoa Hufanga showed flashes last year and could get a shot at the full-time role. Odom has experience as a starter in Indianapolis and Tarvarius Moore is also in the mix after missing last season with an Achilles injury.

EXPECTATIONS: The Niners are counting on Lance to make a seamless transition as starting quarterback and expect that will make them contenders again in the NFC. The team is filled with stars supporting Lance with Samuel one of the most dynamic playmakers in the game, George Kittle one of the top tight ends and Williams the best left tackle in the league last season. The defense has Bosa, insider rusher Arik Armstead and linebacker Fred Warner leading the way. If Lance can be a slight upgrade on Garoppolo, San Francisco should be one of the top teams in the conference. If he struggles in his first full season since 2019 at North Dakota State, it could be a long season.