After 7 surgeries, Giants' Gates eager to prove himself 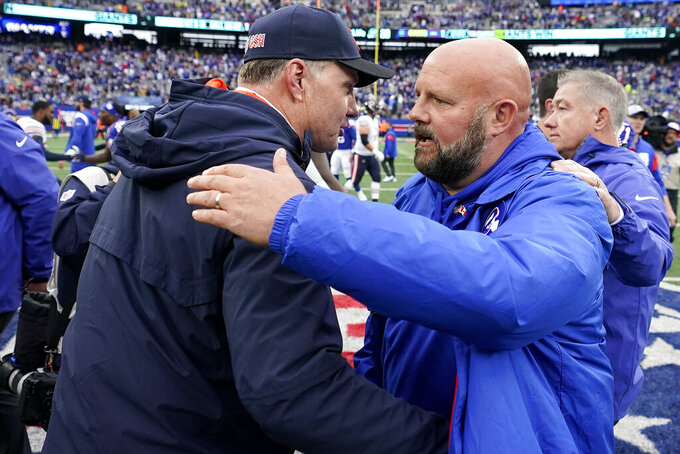 EAST RUTHERFORD, N.J. (AP) — New York Giants center Nick Gates is having fun again on the football field and all he is doing is practicing.

There is a wide smile across his face talking about the experience, and his teammates are enjoying it as much as him.

It's been a long, hard road back just to practice for Gates, who will turn 27 next month. He fractured the fibula and tibia in his left leg against Washington in second week of last season and endured the roller coaster of emotions and up-and-downs of seven surgeries and subsequent rehabilitations.

On Wednesday, the Giants (3-1) took him off the physically unable to perform list and designated him to return to the roster. He now has 21 days to show the team he can still play the game he loves. If he fails to do that, he may be released.

Gates had been placed on the PUP list at the start of training camp and worked most of the time with the trainers. He would sometimes watch parts of practice and attend meetings, mostly with the offensive line.

“It definitely gets a little lonely,” Gates said of his comeback. "All the guys in the locker room have had my back. They tried to include me as much as they could, but it was a roller coaster of emotions, I’m not going to lie.

“At one point after I had my last surgery, which was No. 7, they had to take the rod out because I had an infection in my bone and put another rod in,” he added. “I thought I wasn’t going to be able to play this year, at least not until midway.”

Gates, who made the Giants as a free agent out of Nebraska in 2018, can vividly recall every procedure on his leg. It started with surgeons putting in a rod and two screws. He later got compartment syndrome and doctors had to slice the leg open to relieve the swelling. It led to an ugly scar and later skin grafts. Finally the infection in the tibia forced a change of rods earlier this year.

Gates had his down moments and he talked with Dr. Lani Lawrence, the team's sports psychologist. She told him it was normal to feel that way and it was part of the process of healing and moving forward, he said.

Gates said through it all, his only goal was to play football again. He feelings increased the past couple of weeks watching the team play at MetLife Stadium.

“I'm like: 'I just want to be back out there again with the guys and just have fun,’” Gates said. “What other job lets you hit people and basically do whatever you want? It’s a fun time.”

Gates had been the Giants' starting center. He was hurt in a game when he started at left guard because Shane Lemieux sustained a knee injury in the opener to the 2021 season.

With Gates' career uncertain, the Giants signed former Buffalo Bills center Jon Feliciano and he has been the starter this season.

He understands Gates' injury. The Bills played Washington the week after Gates was hurt and he had to watch the injury several times in preparing for that game. It was ugly.

“It’s a credit to him as a man to go through that,” Feliciano said. “I only imagine the mental struggles that he probably has been through. And just to be going out there is a testament to who he is.”

Wide receiver Sterling Shepard, who tore an ACL in the Monday night game against Dallas on Sept. 26, is taking a similar approach to his latest injury. He tore an Achilles tendon late in the 2021 season. But he wants to come back in 2023.

“I’m a fighter,” Shepard said. “So, I want to go out on my own terms. I don’t want something like this to make me go out. So, I’m going to fight to get my body back to where I can perform and get this thing good.”