With Allen, addition of Von Miller, Bills built to contend 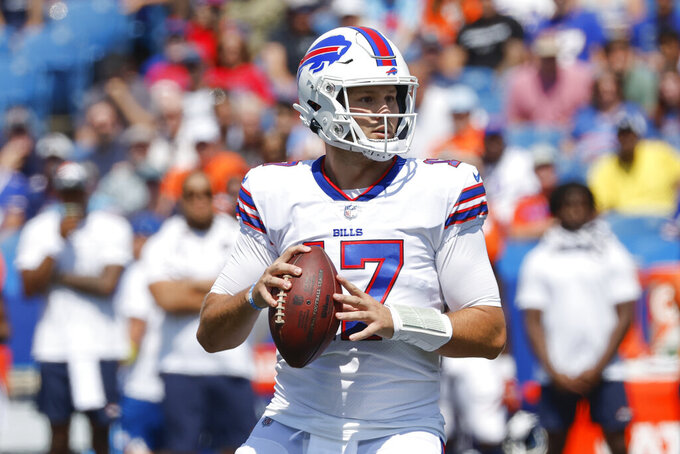 Strengths: A Josh Allen-led offense returns mostly intact with the only question mark hovering over Dorsey taking over as a first-time NFL coordinator. Dorsey is at least familiar with the Bills offense in serving as the team’s quarterbacks coach before being promoted to replace Daboll, who was hired to coach the New York Giants this offseason. Despite not re-signing Beasley and Sanders, the Bills have an established group of receivers with Gabe Davis and Isaiah McKenzie ready to step up as starters behind Stefon Diggs. Buffalo’s running attack, which was inconsistent last season, should be improved with Aaron Kromer taking over as offensive line coach and Buffalo using a second-round pick to select Cook, the younger brother of Vikings star RB Dalvin Cook.

Weaknesses: The secondary faces questions with starting CB Tre’Davious White’s season-opening status uncertain and with Wallace leaving in free agency. White has yet to practice while recovering from a major left knee injury he sustained in late November. As it stands, Elam, a first-round draft pick, and third-year CB Dane Jackson are the projected starters.

Camp Development: The Bills' rebuilt defensive line looked stout with the addition of Miller, and with DE Greg Rousseau showing signs of development following a promising rookie season. Buffalo retooled its line in part to address a middling pass rush.

Fantasy Player To Watch: McKenzie has an opportunity to become a key fixture in a pass-happy offense in being given the chance to take over the slot receiver role. He’s faster and shiftier than Beasley, and already has an established rapport with Allen in his previous role as a backup and gadget player.

Expectations: There is nothing suggesting the Bills will take a step back. If anything, this team has more overall depth from last year, while also driven to overcome how it closed last season with an infamously dubbed “13 seconds” meltdown. Buffalo squandered a three-point lead in the final 13 seconds of an eventual 42-36 overtime loss to Kansas City in an AFC divisional round playoff. With Miller, they’ve upgraded their pass rush, and have placed an emphasis on having a more effective running attack. The AFC as a whole might be stacked with plenty of contenders, but it would be regarded as a major disappointment if the Bills fail to reach the conference championship game.