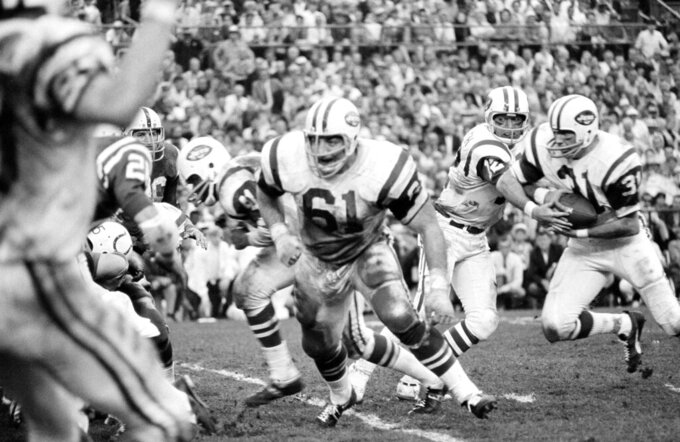 NEW YORK (AP) — Bill Mathis, a versatile running back and an original member of the New York Jets franchise, has died. He was 81.

The team announced Mathis' death Tuesday on Wednesday night. There was no cause of death given, but the team said Mathis had long been dealing with several health issues.

Mathis played his entire career in New York, joining the then-Titans in 1960 and helping the Jets win the Super Bowl in 1969 before retiring after the following season. He was the franchise's first team MVP in 1961 and was selected an AFL All-Star in 1961 and '63.

“Thank you for the memories,” former Jets teammate Earl Christy posted on his Facebook page. "Rest well, Bill, my teammate, my friend ... May God bless your family during this time.”

Mathis was born in Rocky Mount, North Carolina, and grew up in Manchester, Georgia. He was a star at Clemson, where he is a member of the school's hall of fame. Mathis is also in the Georgia and South Carolina sports halls of fame.

He was drafted by both the AFL's Denver Broncos and the NFL's San Francisco 49ers in 1960. His draft rights were later held by the Houston Oilers, who traded him to New York shortly before the start of the regular season.

Mathis earned a reputation for being a tough competitor who pushed through injuries. He played in 140 games over the next 10 seasons for the Titans/Jets franchise, including the team's lone Super Bowl appearance during the 1968 season. Mathis was also quarterback Joe Namath's roommate on the road.

After being a primary ballcarrier early in his career, Mathis became a lead blocker for Matt Snell and Emerson Boozer. Mathis had three catches for 20 yards in the Super Bowl, with two of them prolonging scoring drives in the Jets' 16-7 victory over the Colts.

He played one more season before retiring as one of only 20 players who played in the AFL for the league's entire 10-year existence. Mathis was also one of just seven who played all 10 seasons with one franchise.

He remained in New York after his playing career and found success in the business world.

Former Jets public relations director Frank Ramos told the team's website that Mathis was “a real Southern gentleman, a very smart businessman, with a very good sense of humor, who had a long career on Wall Street and as a philanthropist.”