Brady, Bucs look to get offense going vs. Mahomes, Chiefs 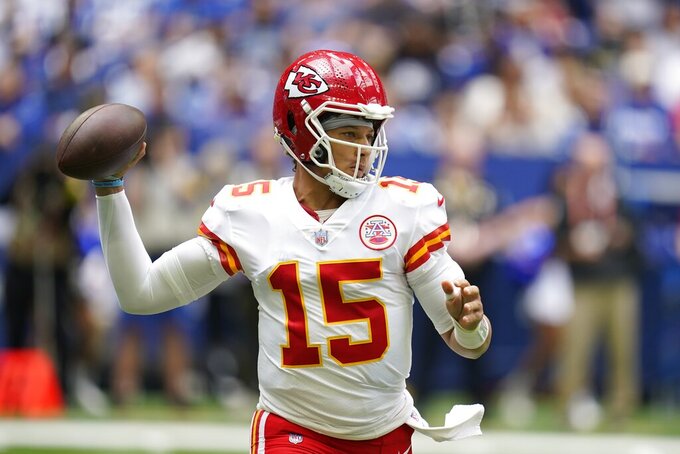 Tom Brady knows he and the Tampa Bay Buccaneers have to be better moving forward, beginning with a highly anticipated matchup Sunday night against Patrick Mahomes and the high-scoring Kansas City Chiefs.

It’s the first meeting between the Super Bowl-winning quarterbacks since the Bucs trounced the Chiefs in the NFL title game two seasons ago.

There’s an added element of intrigue with the game being played in Tampa in the aftermath of Hurricane Ian, which cut a destructive path across Florida earlier in the week.

“I always feel like sports has brought people together. ... Watching different adversities, whether it was 9/11 or if it was (Hurricane) Katrina, sports has an amazing way of kind of healing wounds, bringing people together and bringing communities together,” Brady said.

“I think any time you can participate in something like that, it’s a great feeling. It means a lot for us to have the opportunity to go out and play for our fans always,” Brady added. “But after what so many people have gone through in the state, it’s great to go out there and give them something to cheer about.”

The Bucs (2-1) relocated to South Florida to avoid direct contact with the storm, using the Miami Dolphins practice facility to prepare for the Chiefs (2-1).

They are off to a successful start despite struggling offensively. Injuries have been a factor, though Brady isn’t using that as an excuse for the team having more turnovers (four) than offensive TDs (three) up to this point.

“We’re three games in. I think we realize that there’s things we haven’t done so well that we’ve got to get corrected,” Brady said.

“Whoever’s in the game, we’ve got to do a better job of scoring points,” the seven-time Super Bowl champion added. “That comes down to a lot of things — penalties, turnovers, making the right play, executing the play. If we do that, I believe we will score points.”

Like the Bucs, the Chiefs are coming off their first loss of the season. Tampa Bay limited Kansas City to three field goals the previous time the teams met, and head coach Todd Bowles’ defense has only gotten better since then.

“They’re one of, if not the best defense in football,” said Mahomes, who is looking to rebound from a 20-17 road loss to Indianapolis.

“They have great players in every phase ... and they’ve played together for a while, so they’re going to kind of confuse you, give you different looks, and they’re going to fly around and make plays,” Mahomes added. “So, it’s about us executing, getting the ball out of my hand and making other guys make plays.”

The Bucs are allowing a league-low nine points per game, limiting Dallas to a field goal in a 19-3 season-opening win and not allowing a touchdown until the fourth quarter in beating New Orleans 20-10. Last week, the unit held Green Bay to 14 in a two-point loss to Aaron Rodgers and the Packers.

The Chiefs only managed 58 yards rushing on 23 carries last week in Indianapolis, even though the Colts were missing star tackler Shaquille Leonard. Now, they’ll have to face the league’s fifth-best run defense in Tampa Bay.

Bucs WR Mike Evans returns after serving a one-game suspension for his role in an on-field brawl at New Orleans two weeks ago. Two of Brady's other primary receivers — Chris Godwin (hamstring) and Julio Jones (knee) missed the past two games because of injuries. Their status for Sunday night remains uncertain, though Bowles said early in the week that he thinks Jones will play.

Chiefs wide receiver Mecole Hardman has been slowed by a bruised heel, and given that speed is his primary weapon, anything that slows him down is a problem. Hardman has an important role in the Kansas City offense, stretching the field vertically on fly routes and horizontally on jet sweeps. He also has the most experience among wide receivers in the offense.

“We have guys with speed,” Mahomes said, “but Mecole has a different kind of speed than most guys out there, and he’s a guy who’s been in this offense for a few years. ... Hopefully his heel gets better quickly.”