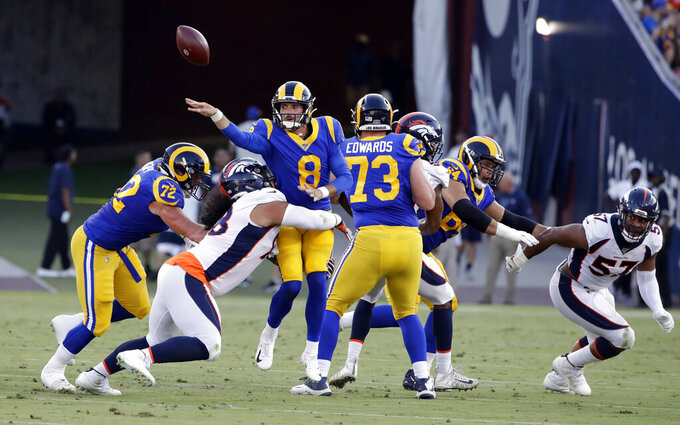 ENGLEWOOD, Colo. (AP) — If nothing else, the Denver Broncos should be fresh for their season opener Monday night at Oakland.

Not only did the players get a dozen days off between the start of training camp on July 18 and cutdown weekend, but they're getting two days off this week even as coaches work in seven new players whose first workout with the team came Monday in a 99-degree scorcher .

Quarterback Joe Flacco only took 30 snaps in the preseason, directing four drives that produced two field goals, as he prepares for his second chapter in Denver and his first regular-season action since November.

He and the other starters on offense sat out the last two exhibition games, so they'll have had a nearly three-week break by the time they play the Raiders.

That doesn't mean Vic Fangio is one of those head coaches who view September as a time to establish an identity after using starters sparingly in the preseason.

"But it could change."

Just like his roster in the 48 hours following cuts.

With seven newcomers, Fangio said he hadn't had time to talk with each of them.

"It's been so hectic," Fangio said. "They were in here at 6:30 this morning, took a physical and got suited up. Haven't had a big message for them yet."

When he does get to that, it'll probably be something along the lines of getting ready to pitch in immediately.

"One thing about these guys that you've claimed from other teams, yes, they're coming in and learning a new system. But they've come from other camps, so they're football-ready," Fangio said. "And it's actually easier to come in and learn in a game week than it is in training camp because things are pared down and dialed in more."

Only the Cardinals and Dolphins had more waiver wire claims than the Broncos, who filled four major needs by claiming backup QB Brandon Allen from the Rams, fullback/tight end Andrew Beck from New England, guard/center Corey Levin from Tennessee and receiver/returner Diontae Spencer from Pittsburgh.

They also traded for Patriots cornerback Duke Dawson, signed ex-Bengals cornerback Davontae Harris and re-signed inside linebackers Keishawn Bierria, who played 16 games for them last season, and Corey Nelson, who played in Denver from 2014-17.

"We're not the only team that's had these roster gymnastics," Fangio said. "It happens every year. John (Elway) and his guys were keeping track of everyone around the league, and we just felt that with each and every move it helped make us better. It doesn't mean that it's right, but that's what we're thinking."

The Broncos needed help at linebacker with leading tackler Todd Davis (calf) and top reserve Joe Jones (triceps) out. Fangio said "there's a chance" Davis could return to practice this week and play in the opener, but Harris stepped right in calling defensive plays.

"I've been around the league a few times and each team I've been on I had the green sticker" allowing him to receive audio transmissions from the coaching staff, Nelson said. "I've been making the calls. So, it's nothing new to me. It will be nothing unfamiliar. I'm used to it."

Spencer played four seasons in the Canadian Football League, where he returned 191 punts, including a whopping 82 last season for Ottawa.

Spencer originally signed with the Rams in 2014, and after he was cut, he went to the CFL to try to get back to the NFL.

"I never thought it would take four years," he said.

Allen steps in as Flacco's backup with Lock out for at least eight games with a sprained right thumb.

"He comes from a similar system, so hopefully his learning curve will be short," Fangio said.

Allen won't be spending his two off days this week relaxing, that's for sure.

"It'll be pretty extreme," Allen said of the crash course awaiting him in this offense. "I think it's not about trying to learn it all in the first week, but it's about being comfortable with some of the stuff they might have me do if that happens."