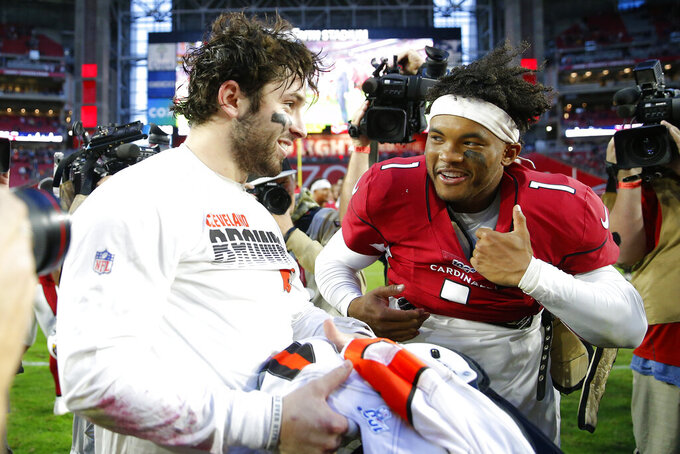 CLEVELAND (AP) — They were once college teammates, two ultra-competitive, trash-talking alpha males pushing each other each day on the practice field, in meeting rooms and while playing video games to be better.

On Sunday, their close friendship gets strained for a few hours.

For the second time as pros, Murray and Mayfield will match up as the Arizona Cardinals (5-0), the league's only remaining unbeaten team and one of the season's biggest early surprises, visit the Browns (3-2), who are coming off a still-hard-to-fathom 47-42 loss to the Chargers last week.

While the spotlight will illuminate the two QBs, Murray's not making more of going against Mayfield again.

However, leading into the game, much of the talk has centered around Murray and Mayfield, a pair of tough Texans who forged their bond while guiding the Sooners. Even when Mayfield was OU's starter, Murray was right behind him reminding him he would one day take over.

“He was the guy, but I gave him (stuff) all the time,” Murray said this week. "It was fun, it was competitive. But at the same time, we had the best quarterback room in the country – we knew it.

“The confidence, the swagger about that room was unmatched.”

They became the first players from the same school to win consecutive Heismans, a remarkable feat and one celebrated in several TV commercials featuring Murray and Mayfield over the past two years.

It's a credit to Murray and Mayfield that they never let their fiery competition at Oklahoma turn into a firestorm. Murray patiently waited as Mayfield was granted another year of eligibility — “my senior lap year,” the Browns quarterback joked — before taking over and taking off.

“We were able to push each other and absolutely get the best out of each other,” Mayfield said. “All egos were put to the side, and we were able to do some special things.”

Murray's still doing them and credits Mayfield for showing him the way.

“Bake’s a great player. He gets a lot of hate, and all that, but I watched it first-hand each and every day – how hard he worked, make throws that a lot of people can’t make,” he said. "I saw it all and I can legitimately say he’s like that. I’m glad that I got to learn from him throughout those years.”

Mayfield has heard compliments like that from Murray before and appreciates them. He also knows his buddy is out to beat him.

“With him, there's always something,” Mayfield said with a smile. "He might show it differently, but behind closed doors, he's quite the trash talker. Don't let him fool you.”

Cleveland limped back from Los Angeles.

Murray's speed makes him dangerous from anywhere on the field.

The Browns know they can't take a second off.

“He's a roadrunner," said safety John Johnson III, who faced the Arizona quarterback numerous times when he was with the Rams. “He's just so quick and so fast. I was talking to (Browns backup QB) Case Keenum, and he was like, free rushers at him is kind of like what he wants. He just dances around people.

“It's kind of like you have to tempo your rush and try to keep him in the pocket. He is a shorter-stature guy, so we make it harder for him to see, especially with our D line — they're so big.”

The Cardinals managed to stay relatively injury-free during the season’s first month. That’s starting to change.

Arizona will be without two starters – and probably three – on Sunday, along with coach Kliff Kingsbury, who tested positive for COVID-19.

Tight end Maxx Williams is lost for the season because of a knee injury suffered last week against the 49ers. Three-time Pro Bowl center Rodney Hudson won’t play because of his injured ribs. Linebacker Chandler Jones is on the reserve/COVID-19 list and is doubtful.

The Cardinals were missing two of their main cornerbacks – Murphy and Wilson – but the group still managed to turn in a solid performance in the team’s 17-10 win over the 49ers last weekend.

Antonio Hamilton, Robert Alford and Jace Whittaker stepped up and played big roles. Hamilton has been up and down from the practice squad this season but played 97% of the snaps Sunday.

The 32-year-old Alford has been solid after missing the previous two full seasons with various injuries. Whittaker was released after training camp but re-signed when injuries hit, playing 34 snaps against the 49ers.

“It’s a plug-and-play-type defense,” Hamilton said. “If you’re smart, you compete and you’re relentless, you can come and play in this defense as long as you know what you’re doing.”