Chargers' running game hopes to be factor against Tennessee 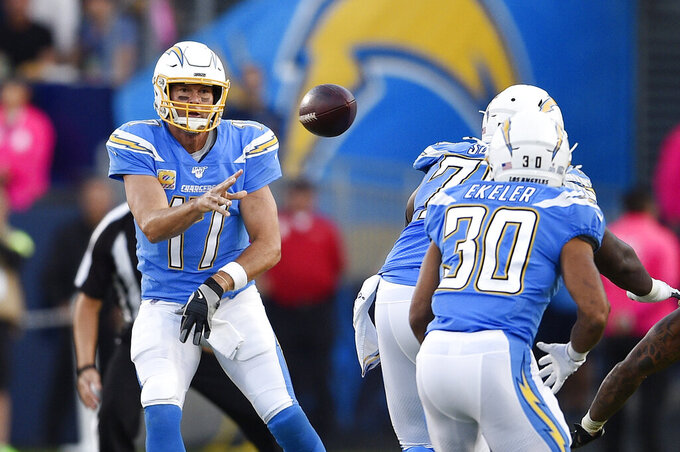 COSTA MESA, Calif. (AP) — Getting behind by two touchdowns early doesn't help any team's running game, but early deficits are just one reason why the Los Angeles Chargers' ground game has been stuck in neutral the past two weeks.

The Chargers averaged 103.5 yards on the ground in their first four games but have been held to a total of 67 in losses to Denver and Pittsburgh. It is the first time since 1983 that they have gained 35 yards or less running the ball in two straight games.

Los Angeles travels to Tennessee on Sunday for a matchup of 2-4 teams and is hoping to cure some of its offensive shortcomings.

"You can fall behind early and still have plenty of time to catch up. But in that third quarter, if you are down two or three scores, it is hard to hand off that much," coach Anthony Lynn said.

The Chargers called only 12 runs out of 62 plays in the second half after halftime deficits of 17-0 to Denver and 21-0 to Pittsburgh. But even when they tried to establish some semblance of a ground game in the first half it has not panned out.

Melvin Gordon's return has not gone as smoothly as hoped. The star back, who held out for two months due to a contract dispute, is only averaging 2.5 yards per carry with his longest run going for seven yards.

Gordon is hoping that if the Chargers can get a lead or keep the score within a touchdown, that he can get more carries and establish more consistency.

"There's no rhythm you can get into with eight carries, I don't care what running back you are," he said. "I get stronger down the line. With the more carries you get, you run that play and you're like, 'OK, this is how they are playing it.' So when you run that play again, I know how I'm going to treat it. But when you get eight carries, you've seen the same play for the first time every time. There's no feel to it, and you never get a feel for the game."

Lynn has had Gordon and Austin Ekeler both in on 11 plays, but Pittsburgh kept a linebacker focused on the backs to prevent any huge receptions on checkdowns after Ekeler had 15 receptions against the Broncos.

Ekeler is third in the AFC with 611 scrimmage yards but was held to a season-low 28 last week. Ekeler is still getting his share of touches despite Gordon's return.

Also hampering the run game are the team's struggles on first down. After six weeks, the Chargers are averaging 3.41 yards on first down, which is fourth-worst in the league.

"It does not help getting behind the sticks early and it has been happening too often," Lynn said.

The Chargers are also trying to build a run game behind an offensive line where only one of the starters has five years or more of experience due to the absence of left tackle Russell Okung (blood clots) and center Mike Pouncey (season-ending neck surgery). They are averaging only 2.7 yards on runs up the middle, which is fourth-worst, and 3.1 yards around left end, which is next-to-last.

One way they can get more consistency is if Philip Rivers has fewer turnovers. He has had three in the first half the past two games which has led to 14 points.

"It's really a handful of plays we've been unable to overcome. It hasn't been 60 minutes of bad football, it's just enough we haven't been able to overcome it," Rivers said.

The Titans defense comes into Sunday's game ranked eighth overall and 15th against the run. Gordon did not play in last year's game in London due to a hamstring injury but rushed for a career-high 196 the last time he faced them in 2016.

"I feel good, but just physically and mentally it's tough. It's hard for a back to make it happen getting the carries that I've been getting," Gordon said. "I know that we want to run the ball. I know that. Coach Lynn makes a big emphasis on that."