Clowney says Watson trade brought him back to Browns 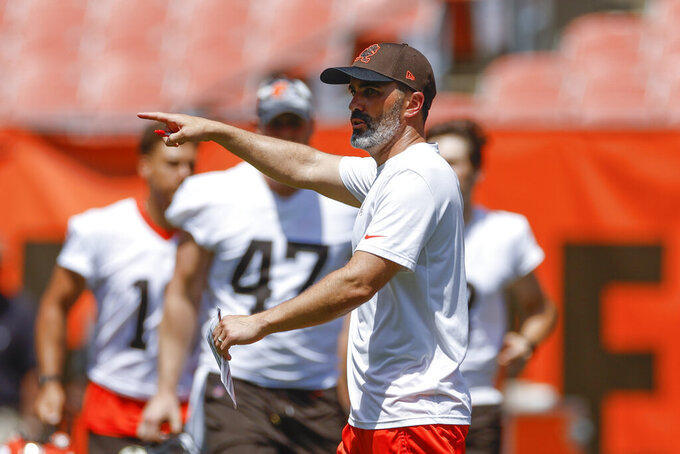 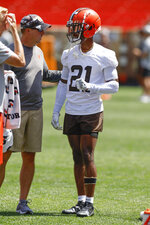 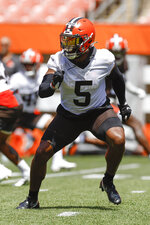 CLEVELAND (AP) — Jadeveon Clowney had numerous reasons — familiarity, money, playing alongside Myles Garrett again — to re-sign with the Browns for a second season.

However, one topped them all.

Clowney said Thursday that Cleveland's stunning acquisition of controversial quarterback Deshaun Watson, his former teammate in Houston, was the main reason behind the defensive end's decision to return to the Browns.

Watson, whose future remains cloudy amid allegations of sexual misconduct while with the Texans, waived his no-trade clause in March and signed a five-year, $230 million contract to possibly end the Browns' long search for a franchise QB.

Once that happened, Clowney knew he was staying in Cleveland.

“I was all about where my boy Deshaun was going,” the three-time Pro Bowler said as the Browns wrapped up their mandatory minicamp with a practice inside FirstEnergy Stadium. "When I talked to them (Browns), I said, ‘I played with him, he kept us off the field a lot.’ I was like, ‘I know you’re going to keep us off the field, you put up a lot of points, put us in rushing situations instead of having to stop the run all the time.’

"I just wanted to go play with him and see what I can do with him again.”

The Browns, Falcons, Panthers and Saints were the final bidders for Watson, who is facing 24 civil lawsuits from massage therapists accusing him of sexual misconduct. He's also likely to get suspended by the NFL.

Clowney was asked what would have happened if Watson had chosen Atlanta.

“I probably would have followed him there,” said Clowney, who signed a one-year, $10 million deal with the Browns in May. “But who knows? He ended up here. We’re here now. That’s over with. Let’s go. We’re chasing it now.”

Chasing quarterbacks is what Clowney does best, and he's eager to build off his strong season — a personal revival of sorts — by doing more in 2022.

The 29-year-old finished with nine sacks in 14 games, the most he recorded in both categories since 2018. Playing opposite the All-Pro Garrett, Clowney thrived on a Cleveland defense that started slowly but improved all season.

Clowney said the chance to line up with Garrett was another factor.

“Me and him did some good things together,” he said. “We got along well. We played well together. We fed off each other. We felt like we come here and do the same thing — even better. We got a good thing going from last year. We want to keep it going.”

Depending on how the league rules, the Browns could be without Watson for a large chunk of the season. Clowney isn't worried.

“That’s all right. We’ve got a good defense, we can hold it together,” Clowney said. “We did good last year and we were banged up on offense all over the place and our defense played well for what we had going on. We’ve got the same defense back, couple additional pieces. We’re going to be all right.”

Clowney perhaps knows Watson better than any of the Browns. He said the 26-year-old hasn’t outwardly shown any effects of the scrutiny and daily headlines about his case.

“He doesn’t say much,” Clowney said. “He comes in here and works every day, he doesn’t let it bother him, mess up his job.”

Notes: Pro Bowl cornerback Denzel Ward didn’t finish practice after suffering an apparent lower leg injury. Ward, who signed a five-year, $100.5 million contract extension in April, walked slowly to the locker room after medical personnel checked him on the sideline. Coach Kevin Stefanski did not have an update. The No. 4 overall pick in 2018, Ward had three interceptions last season, returning one 99 yards for a touchdown. ... The Browns officially announced the hiring of Catherine Raiche as assistant general manager and vice president of football operations. She previously worked in Philadelphia's front office. ... Rookie K Cade York signed his contract. The fourth-round pick from LSU showed off his powerful leg with a 50-yard field goal that would have been good from beyond 60.