Colts use depth, ground game to build momentum without Luck 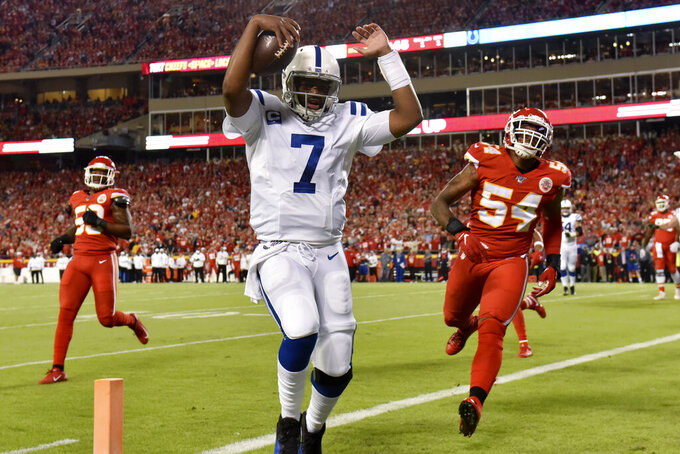 Turns out, it only made them more determined.

Five games into the season, Indy heads into the bye week with three wins, tied for the AFC South lead with Houston and full of momentum after Jacoby Brissett pulled off a feat Luck could not in what turned out to be his final NFL game — winning at Kansas City.

"It's a great win," said Brissett, Luck's successor. "Playing against a team like this, on their home field, on 'Sunday Night Football', who knows where it's going to take us. But we're pointed in the right direction."

There's little doubt the Colts (3-2) have been one of the early season's biggest surprises despite the bumpy ride.

Luck's impromptu postgame announcement on Aug. 24 sent shockwaves through the league and down the Colts' sideline, where some players said they first learned of the decision from screaming fans.

Then retirement rumors started swirling around 46-year-old Adam Vinatieri after the league's career scoring leader missed five of his first eight kicks, including two field-goal attempts and an extra point in a season-opening overtime loss to the Los Angeles Chargers.

Week 2 was marred by the loss of All-Pro linebacker Darius Leonard because of a concussion, which kept him out of the next three games. And the defense some thought could crack the league's top 10 started developing its own cracks.

But the Colts refused to give in to the distractions or the detractors and instead relied on the deep roster assembled by general manager Chris Ballard to overcome obstacles and prove the doubters wrong.

"We've got guys who can step up at any moment and make a play to put us in position to win the game," said Justin Houston, the 2014 league sacks champion who signed with the Colts as a free agent in March and helped seal Sunday's win with a fourth-down tackle late in the game. "I think Chris Ballard did a great job of putting this team together, and we've got to continue to build on what we have. We have a great team."

It's all by design.

Almost from the moment Ballard arrived in Indy in 2017, he's talked about the necessity of building around a philosophy rather than a couple of star players.

The difference is easily recognizable to Colts fans.

After Edgerrin James suffered a torn anterior cruciate ligament in October 2001, the Colts won only two more games and missed the playoffs. When Peyton Manning sat out the 2011 season with a neck injury, the Colts lost their first 13 games and finished 2-14. And when Luck missed the 2017 season while recovering from surgery on his throwing shoulder, Brissett went 4-11 as the starter.

This year, Brissett has thrown as many touchdown passes as Tom Brady (10) and only one more interception (three) than Brady, whom he backed up in 2016.

Indy has continued winning despite a depleted receiving group and secondary and the absence of Leonard, their top defensive player. And they've done it, largely by relying on an offensive line that went from worst to first in one season and is built to excel at old-school football.

The Colts are No. 4 in the league in rushing (142.0 yards) and held Kansas City to a season-low 10 points largely by keeping Patrick Mahomes, the reigning MVP, off the field for all but 7½ minutes in the second half Sunday night.

It's no surprise to Reich, who was committed to being a run-first team long before Luck's departure.

"I believe that Chris and his staff have done a great job of getting the kind of players in here that we can be a run-dominant team," Reich said. "I think we're starting to see that, but it's never easy."

And now the Colts find themselves in position to use the next five games to position themselves for a playoff push some considered inconceivable less than two months ago.

Following the bye, Indy hosts the Texans and Broncos before visiting Pittsburgh. The Colts then return home for matchups with Miami and Jacksonville — and what they hope will be the kind of finish Ballard anticipated even on the night of Luck's farewell speech.