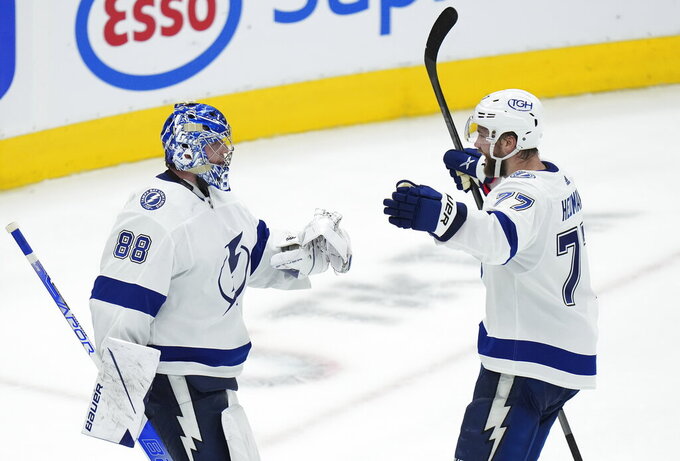 As soon as the NHL expanded to more than six teams, and television sets started showing games in color, the Toronto Maple Leafs were in trouble.

Once again, the hockey playoffs are moving on to the second round without the Maple Leafs, who will be watching the rest of the postseason from a familiar spot.

Despite playing in hockey's hotbed, with enormous resources and fan support at their beck and call, the Maple Leafs have somehow found a way to go 55 years — 55 YEARS!! — without a Stanley Cup title.

Heck, they haven't even reached the finals during those five-and-half decades, a staggering level of incompetence that might just make them the most underachieving franchise in all of North American sports.

Yep, that about covers it.

While certainly giving a shoutout to other perennially frustrated teams, such as the NBA's Los Angeles Clippers and the NFL's Detroit Lions, the Maple Leafs are really in a class by themselves.

They should be one of the NHL's model franchises, essentially the ice version of the New York Yankees or New England Patriots or Los Angeles Lakers.

Yet somehow, the Maple Leafs always find a way to blow it.

They were at it again this past weekend, losing 2-1 at home in Game 7 of an opening-round series to the reigning Cup champion Tampa Bay Lightning.

If that sounds like a broken record, well, it is.

The Leafs have now lost in the decisive game of a first-round series five years in a row — the last three of those coming on their home ice. Overall, they are 0-9 in elimination games during that span, with five decided by a single goal and four going to overtime.

One must go back all the way to 2004 to find the last time Toronto actually won a postseason series. Since then, they've dropped eight in a row.

This one really stung. The Maple Leafs won a franchise-record 54 games and posted the league's fourth-best record during the regular season.

All they have to show for it is a bit of NHL infamy: They've now gone 54 seasons without a Stanley Cup, the longest run of futility in league history (remember, the 2004-05 campaign was wiped out by a labor dispute).

Toronto eclipsed the mark of 53 seasons without a title, which was set by the New York Rangers between 1940 and 1994.

“They’ve got all the pieces. It’s not easy this time of the year,” Tampa Bay's Steven Stamkos said generously of the Leafs. "You just gotta get over that hump.”

It's more like a mountain for the Maple Leafs, who have even been tormented on the home front. The Blue Jays have won a pair of World Series titles, the Raptors have claimed an NBA championship and the Canadian Football League Argonauts have captured seven Grey Cup crowns since the city's last Stanley Cup triumph.

To provide some perspective on just how inept the Leafs have been over the past half-century and then some, let's go back to their most recent Stanley Cup triumph.

When you browse the web for highlights of that series, in which Toronto beat hated rival Montreal in six games, be prepared to watch in black-and-white.

Also, don't be thrown off by Canadiens goalie Gump Worsley not wearing a mask. That piece of protective equipment was still in its infancy.

Looking back, the Maple Leafs did quite well when they only had to beat out five other teams each season, winning nine Stanley Cup titles during the “Original Six” era.

Only the Montreal Canadiens celebrated more in that period, claiming the championship 10 times.

Then, heading into the 1967-68 season, the NHL finally became a real major league, doubling in size to 12 teams stretching from coast to coast.

For the Maple Leafs, it's been nothing but frustration since then. They've been stuck in neutral as the league zipped forward, growing to 32 teams this season with the addition of the expansion Seattle Kraken.

The other “Original Six” teams have all won at least one Stanley Cup title since 1967 (yes, even the jinxed Rangers, who no longer have to listen to chants of ”1940!"). So have 14 expansion franchises, a total of 19 teams in all.

Seven other teams have reached the finals, all of them products of the expansion era. The Vegas Golden Knights played for the Cup in their very first season. The Florida Panthers made it to the finals in just their third year (though they haven't been back since).

Toronto is one of just six teams that hasn't gotten as far as the finals in the post-1967 era — a dwindling group that includes the aforementioned Kraken and three other franchises (a second version of the Winnipeg Jets, the Minnesota Wild and the Columbus Blues Jackets) that entered the league in 1999 or 2000.

The longest finals drought after the Maple Leafs belongs to the woeful Arizona Cayotes, who are about as far from Toronto as a franchise can get, literally and figuratively. Next season, they'll be playing in a 5,000-seat college arena, which actually sounds about the right size for an attendance-challenged team that is perpetually on the brink of financial disaster.

The Coyotes started out as the original Winnipeg Jets, a product of World Hockey Association that became one of four teams from that upstart league to join the NHL in 1979.

The Jets, it must be noted, won three titles in seven WHA seasons before they were gobbled up by the NHL.

So the Maple Leafs truly are in a league of their own.

The champions of underachievement.