Cornerback A.J. Bouye takes place of his mentor in Denver 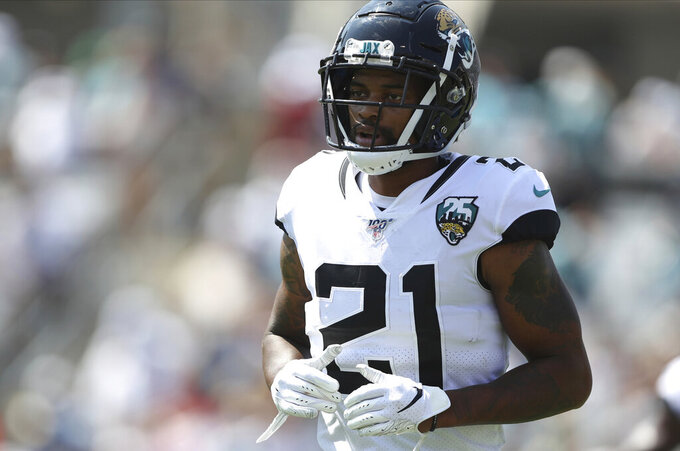 FILE - In this Sunday, Sept. 8, 2019 file photo,Jacksonville Jaguars cornerback A.J. Bouye (21) on the field during an NFL football game against the Kansas City Chiefs in Jacksonville, Fla. Newly acquired cornerback A.J. Bouye learned quite a bit from Chris Harris Jr. He will now be stepping in for the Denver Broncos defensive back. Bouye was acquired in a recent deal with Jacksonville. (AP Photo/Perry Knotts, File)

Now, he follows in Chris Harris Jr.'s footsteps with the newest Denver Broncos starting cornerback stepping in for the one who just left.

Don't be surprised if Bouye plays a little like Harris, who left Denver after nine stellar seasons to sign with the AFC West rival Los Angeles Chargers when free agency opened Wednesday.

Like Harris, Bouye, acquired from Jacksonville for a fourth-round draft pick, went undrafted out of college and took his game to a Pro Bowl level. There was even a part of Bouye who was holding out hope they might just be united in the same defensive backfield next season. He's worked out with Harris in the offseason in the past.

“I learned a lot from him — how to act off the field, work ethic,” Bouye said Wednesday in a conference call as the Broncos announced the deal with the start of the league's new year. “Unfortunately, (the pairing in Denver) didn't happen. He's going to a great situation. I'm looking forward to going against him in L.A. two times a year.”

The Broncos have been active the past few days reshaping the look of their roster after a third straight losing season.

Bouye likes the situation he's entering — a head coach in Vic Fangio who once coveted him when Fangio was defensive coordinator in Chicago, and a system where he can play on the outside.

“I know I can hold my own out there,” said Bouye, who was originally signed by Houston as a college free agent in 2013 after playing at Central Florida. “I'm a physical corner and I'll come up to tackle. I'm always in the running game. ... I study the game. I study it all the time.”

For the past three seasons, he's been a part of a Jaguars secondary that's allowed the fewest passing yards per game (200.2) in the NFL. He was a Pro Bowl pick in 2017.

“Really I don't focus on trying to prove anything,” said Bouye, who has 14 interceptions and 66 pass breakups over his career, along with two more postseason picks. “I focus day by day, just trying to be the best I can through my habits and my work ethic. That's going to get me where I need to be, to be one of the best in the game.”

No arguments from Broncos boss John Elway on that mission.

“He’s a complete cornerback who gives us what we need in both pass coverage and against the run,” Elway said.

Bouye already has a familiarity with defensive back Kareem Jackson, who was his teammate for four seasons in Houston.

“I was going to start linking up with those guys when I got there,” Bouye said.

It may be a little while.

With the coronavirus pandemic limiting access to the team, Bouye said he's going to continue working out in his home gym in Atlanta. He will also watch plenty of game film of his newest teammates, just in case the league is shut down for an extended period of time.

“We really can't focus on when we're going to come back. We have stay ready," Bouye said. “Games might come through fast. We don't know what's going to happen with the offseason program, OTAs or even preseason. Right now, all we can do is focus on what we got to do and just be ready.”